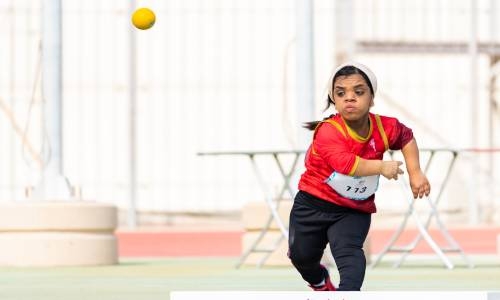 The first medals of the Bahrain 2021 Asian Youth Para Games were won yesterday (3 December) with Thailand’s Suphattha Inkhaoyoi having the honour of being the first athlete to receive a gold medal after throwing 7.16m in the Women’s Shot Put U17/20 F38.

But it was I.R Iran’s athletes who topped the podium most often and who led the medal table at the end of the first day, clearly setting out their intentions to improve on their second position at the last three Asian Youth Para Games. They had a fantastic start to their quest for medal table domination when they won five gold medals in the first session of Athletics and followed this up with three more in the second session.

Host nation Bahrain also had a golden day at the athletics venue when Zaina Albalooshi took first place in the Women’s Shot Put U17 F40-46 61-64, crowning a fantastic 24 hours for her after she had been mentioned by the APC President in his Opening Ceremony speech the night before. Team mate Maryam Alhamidi took Bahrain’s second medal of the Games in the same event for Women aged 17-20 and bronze medals were added by Bassam Ameeri (Men’s Javelin U20 F33-34) and Nassar Alwaqza (Men’s 400m U20 T51-54) giving the locals medals of each colour to celebrate.

In Swimming, it was a golden day for Japan who won eight medals, including three Golds and four silver medals. Hong Kong and I.R. Iran also put in impressive performances with six medals each, Hong Kong taking two gold medals, one silver and three bronze whereas I.R Iran had one gold, four silvers and one bronze. There were many fast times in the pool but perhaps the stand-out swim of the day was by Hong Kong’s Yui Lam Chan whose time of 1.07.74 in the S14 100m Butterfly is close to the all-age group World Record time.

The Goalball pool matches continued and Korea’s men were in a ruthless mood. Both their matches were ended by the ‘mercy rule’ which sees the game ended immediately when one team scores ten more than their opponent and is declared the winner. (JOR 0 – 10 KOR and KOR 12 – 2 KSA). Iran, Iraq and Thailand also won games by this rule (IRI 12 – 2 IRQ, IRQ 12 – 2 JOR  and KSA 2- 12 THA) but it was Iran who came out on top when the two of the sides met (THA 6 v 12 IRI) meaning that they took maximum points alongside Korea from today’s matches. In the women’s event, Iran’s women’s team had two matches. They narrowly lost out in the first to Korea (KOR 8 – 7 IRI) but then the second game of the day proved too much for them and they lost IRI 1 – 11 THA. Pool matches continue tomorrow (4 December)

Boccia pool matches continued today and Thailand’s athletes demonstrated their country’s strength in this sport by securing many play-off spots. In the BC3 Female matches, one of tomorrow’s semi-finals will be an all-Thai affair between winner of Pool B Ladamanee Kla-han and pool A runner up Juthamat Rattana. In the other semi-final Hong Kong’s Ho Yan Chan will meet I.R Iran’s Fatemeh Kheyrkhaha.  The winners of both semi-finals will meet in the Gold medal match tomorrow afternoon. In the men’s Boccia medal events, Thailand’s Natthawut Deemak is through to the semi-finals as is Indonesia’s Muhamad Syafa in the BC1 event. Showing their strength in this sport, athletes from these countries are also through to the Semi-finals in the BC2 event  - Phakphum Linchum from Thailand will meet Muhammad Satriafrom Indonesia. Thailand also have an athlete through to the semi-final in the BC3 event as Thongchai Dokbua will meet Singapore’s Aloysius Gan. The other BC3 semi-final will be contested between Korea’s Sion Jeong and Saudi Arabia’s Abdullah Alsamkari .

In table tennis, pool matches continued but tomorrow will see the battle for medals in the singles events.

In Badminton, the Pool matches for singles and doubles events continued with players from Indonesia, India, South Korea and Thailand ruling the roost. The semi-finals and finals for the sport will be played on the Saturday and Sunday, respectively.

In Wheelchair Basketball, the pool matches continued. Iran had a very convincing victory over Iraq 102 – 27 to maintain their 100% record. At this stage of the competition, they look the team to beat.

At the end of the first full day of competition, the medal table looked like this.