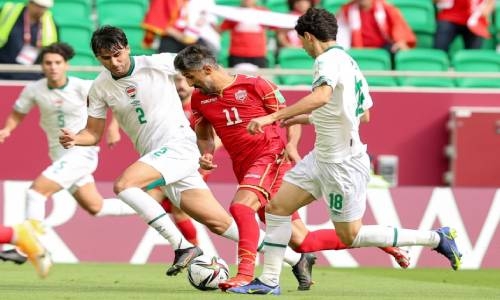 Bahrain in goalless draw with Iraq

Bahrain and Iraq played to a goalless draw yesterday in both teams’ second Group A game of the FIFA Arab Cup 2021, being held in Doha. The result earned the Bahrainis their first point of the competition after two matches.

They need to win their last preliminary round game on Monday against Oman to have any chance of advancing to the ensuing knockout stage. The Iraqis came away with their second stalemate. The nationals must also hope for a favourable result in Iraq’s game against Qatar, who defeated the Omanis 2-1 in yesterday’s other divisional encounter.

The Qataris face off with the Iraqis in their final fixture, also on Monday. Both Group A matches are scheduled for 10pm kick-offs, with the Bahrain-Oman clash set for Ahmad Bin Ali Stadium and Qatar-Iraq at Al Bayt Stadium. Only the top two teams in each of the four groups in the Arab Cup’s opening stage move on to the quarter-finals.

Bahrain had a handful of opportunities to open the scoring in the first quarter-hour but could not take advantage of their chances. Bughammar suffered an injury early on and needed to be substituted by Sayed Mahdi Baqer.

The Iraqis had a majority of the chances in the opening 45 minutes, but Bahrain’s Jaafar was up to the task, making several fine saves. Early in the second half, the Bahrainis averted disaster when Al Hayam managed to clear a loose ball before it crossed the goal line following a parried Alaa Abbas attempt for Iraq.

Sousa then inserted a few fresh faces for the nationals in the game’s final stages. Komail Alaswad and Mahdi Abduljabbar came on for Abdullatif and Al Malood, respectively, and then with just over 10 minutes to go, Ali Madan took over for Marhoon and Mohammed Al Rumaihi substituted Humaidan.

Bahrain’s best chance to score came in the 89th minute from Abduljabbar. Last year’s national league Golden Boot winner hit a header on target from close range but it was headed away by Iraqi substitute Frans Putros right in the face of goal. The Bahrainis tried to press for a winner until the final whistle, but could not threaten any further.