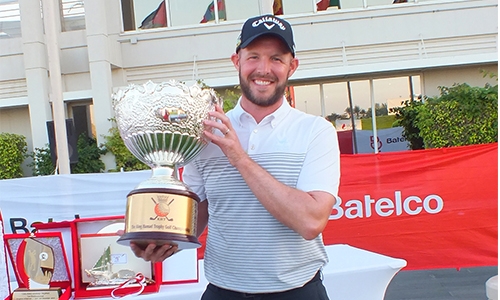 British golfer Luke Joy will be defending his title in the King Hamad Trophy golf championship, which is scheduled to tee off today at The Royal Golf Club (RGC).

Joy is set to spearhead a field of 90 golfers, including 35 professionals and 55 amateurs, who will be vying for the title in the tournament’s 13th edition.

Joy has won the competition twice—first in 2017—and will be joined by several notable players, including former champion Jamie Elson, former European Tour player and holder of the all-time winning record on the MENA Tour Zane Scotland, and several leading names from Bahrain and across the region.

There will be a cut after two rounds for the leading 45 players and ties.

Today’s action is scheduled to tee off with the first group of competitors at 7 am.

The previous edition of the King Hamad Trophy was played in December of 2019.

Joy clinched the title after storming back from six shots behind countryman Sean Towndrow to force a dramatic play-off.

He then beat Towndrow by just one stroke to clinch the coveted title after re-playing the par-four 18th.

The tournament is organised and run by the Bahrain Golf Association.