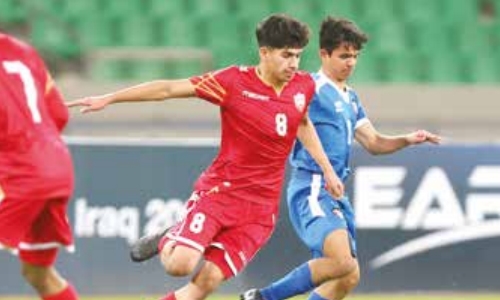 Bahrain was held by Kuwait to a 1-1 draw last night in the second West Asian Football Federation (WAFF) U18 Boys Championship 2021, currently being played in the Iraqi city of Basra.

Team captain Mubarak Mohammed was on target for the nationals in the first half but they then conceded an equaliser with a quarter-hour remaining in regular time.

The stalemate was the first for the Bahrainis in three matches.

They had previously beaten Palestine 2-1 before losing to hosts Iraqis 0-4.

They now play one final game in Group A on Sunday against Yemen.

Mohammed scored the match’s opening goal with a wonder strike for Bahrain in the 45th minute.

The talented youngster fired in a free kick from more than 40 yards out.

His powerful left-footed effort went straight to the top-right corner of the net, leaving the opposing goalkeeper no chance.

Mohammed’s goal was enough to give the Bahrainis the slim lead heading into the half-time break.

In the 76th minute, however, the nationals handed the Kuwaitis a penalty after Fahad Al Azmi was brought down in the penalty area.

Al Azmi picked himself up and stepped forward to take the spot kick, scoring to the left of goal with the Bahraini keeper guessing the wrong way.

In yesterday’s other Group A match, Palestine defeated Yemen 2-0 for their first win.

The Yemenis suffered their second loss.