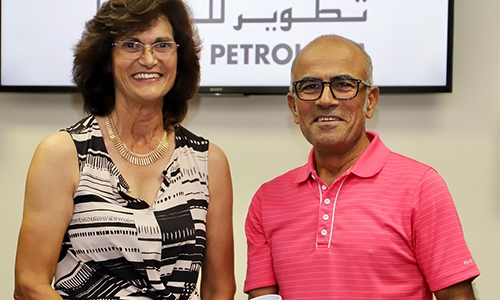 Aside from the overall top two finishers, there were also prizes for the first two in each of the three divisions, as well as for the best lady and the medal.

Finishing as overall runner-up with a gross 80 and 66 net was Vidhu Mittal.

The Best Lady award was claimed by Susan Scott with a gross 93 and net 72.

Meanwhile, the winner in division one was Saad Ali Al Binkhalil with a 71 gross and net 68, but a better back nine than runner-up Abdulrahman Abdulwahed Al-Shaikh, who had the same scores.

In second was Ateeq Yacoob Mujali on a gross 78 and net 67.

In division three, Zuzar Madarwala won with a gross 88 and net 66, while Roger James was the runner-up on a gross 87 and net 69.

Finally, the medal was won by Hamad Fares Al Qutamiw, who finished as the only player scoring under par.

He played one bogey, two birdies and 15 pars in the event.

A total of 89 golfers took part in the competition, which was held in favourable conditions.