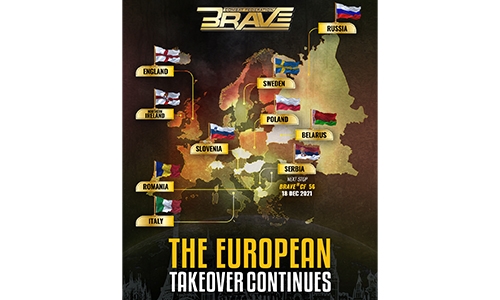 BRAVE Combat Federation, the fastest-growing MMA promotion in the world, is closing the year 2021 adding yet another country to its list of host countries.

Serbia will be the fifth new European destination for the Bahrain-based organization this year, and the tenth European nation to host a show overall.

Back in January, BRAVE CF kicked off the year by making its debut in Russia with a card in the Olympic city of Sochi.

The organization returned to the world’s largest country this November, this time in Rostovon-Don, which hosted World Cup matches in 2018.

In June, it was Belarus’ time to host a BRAVE CF card, in the capital Minsk.

September marked the introduction of Poland to BRAVE Combat Federation, with a fight night held in Konin, the historical central Polish town.

Serbia’s debut is the next step into the already consolidated BRAVE CF European takeover, the fastest and broadest expansion in Europe’s MMA.

This follows a steady growth that began back in 2018, when BRAVE CF hosted its first European fight night, with BRAVE CF 13 taking place in Belfast, Northern Ireland.

Since then, the organization has done shows in England, Romania, Slovenia, and Sweden, which add to the aforementioned events in Russia, Belarus, Italy, Poland, and now Serbia.

BRAVE CF 56 takes place on December 18, at the BelExpo Center, in Belgrade.

The event will be held in association with local promoters of Liga MMA and the fight card is expected to be announced in the coming days.