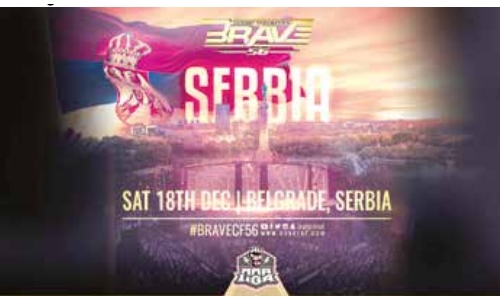 Serbia will become the 25th country to host a BRAVE Combat Federation event.

Organization’s officials have confirmed that the truly global promotion is heading to the Eastern European country on December 18th for its 56th show in a little over five years.

BRAVE CF 56 will close the 2021 calendar with a fight night held in the Serbian capital Belgrade and promoted in association with the MMA League of Serbia.

The event will take place at the Belexpocentar, one of the most prestigious and modern venues in town.

Serbia has previously been home to a “Road to BRAVE” series, in which the biggest talents in the country were scouted by the truly global promotion to develop the sport in the country and offer an international opportunity to regional fighters.

The fight card for BRAVE CF 56 is yet to be announced but the main bouts, as well as the final order, are expected to be confirmed over the upcoming weeks.

The announcement comes only a few days after BRAVE CF 55, which took place in Rostovon-Don, Russia, and saw the “Puncherking” Ali Bagautinov clinching his spot on the grand final of the Flyweight World Title Tournament by defeating Sean Santella in the main event of the evening.