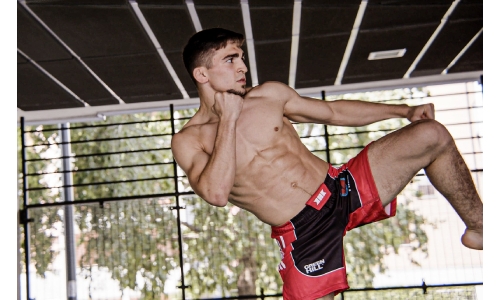 Ever since he strapped on four-ounce gloves as a mixed martial artist, Mochamed “The Beast” Machaev has donned the Austrian colors as his way to pay tribute to the country that welcomed him with open arms.

Machaev was born and raised in Chechnya, Russia, but he and his family decided to migrate to Vienna, Austria when he was four years old.

Like any new kid in town, he pushed through language barriers and prejudice as he turned an unfamiliar place into his home and adopted a new culture and several languages as his own.

Participating in athletics was one way for the then-youngster to ingratiate himself with the local community.

Doing so broke the ice and allowed him to make new friends and stay active, but it wasn’t until he discovered combat sports that he truly began to shine.

Machaev did shine like a diamond on the sport’s global stage, representing Austria in various international promotions such as BRAVE Combat Federation and racking a 10-0 record as a Featherweight before losing the streak during his bantamweight debut.

The 2020 BRAVE CF Breakout Fighter of the Year will get to reconnect with his roots on November 6 as he takes part in the Bahrain-based outfit’s return to Russia event in association with Pro FC.

Machaev will square off with Kasum Kasumov on the supporting card of BRAVE CF 55, which is set to emanate from the beautiful city of Rostov-on-Don on November 6th.

“Kasum is in a really great school, Abdulmanap School, they train wrestling and ground and pound like Khabib [Nurmagomedov],” says Machaev.

“This is his game, put me down, hold me down, submit me maybe, that’s his goal.

My goal is to stay on my feet and defend the takedowns.

That’s what’s going to happen in that fight, a striker against a wrestler.”

The 21-year-old seeks vindication after falling short at the hands of Gamzat Magomedov by 54-second knockout at BRAVE CF 52: Bad Blood this past August.

“I don’t think about how I’m going to end the fight.

For me, it’s just important to win every single round, that’s all that matters to me. It doesn’t matter how the fight will end, it just matters to me that I will be victorious.”

Machaev could have opted to sit out and recover from the loss, but an opportunity to return home and put himself back in the winner’s circle was difficult for him to pass up.

“The Beast” may be coming home with an Austrian citizenship, but on November 6, he will prove that the Russian warrior spirit has been ingrained in his DNA since the first day he stepped inside the cage.