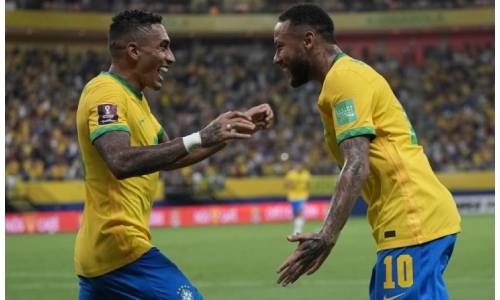 Neymar started the week facing criticism after a poor performance in a World Cup qualifying match and his suggestion that the 2022 tournament might be his last.

But the striker helped erase many of those thoughts by providing key elements in all of the Brazil goals in Thursday’s 4-1 win against Uruguay.

The 29-year-old Neymar, who had a disappointing performance in Sunday’s 0-0 draw at Colombia in the previous round. arrived in the northwest Brazilian city of Manaus on Monday with dozens of fans in front of the team’s hotel. That would be the usual, were it not for a wave of criticism he has faced at home for months.

Neymar scored the opening goal against Uruguay after dribbling past goalkeeper Fernando Muslera. He then took the shot that allowed Raphinha to add the second.

And then he provided two assists; one in a through pass to Raphinha and a cross that landed on the head of Gabriel Barbosa.

Midfielder Fred, who assisted Neymar on his goal, said Brazil players felt the difference in atmosphere since they arrived in Manaus. And that includes the team’s star.