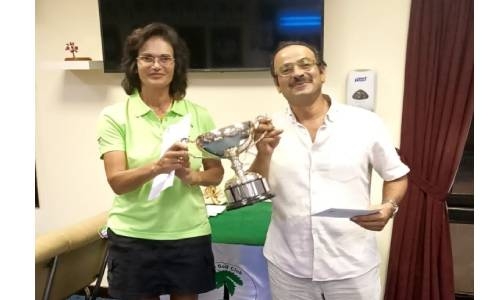 Majed Al Zayed clinched the Bill Brien Trophy over the weekend at Awali Golf Club (AGC), which has officially opened its 2021/2022 season.

Al Zayed claimed the victory in the 18-hole stableford competition after scoring 41 points.

He put in a steady performance in good playing conditions, and his choices on the course were well-thought out, with his execution often as he planned.

Al Zayed was later presented his winner’s trophy and other prizes in an awarding ceremony held at the AGC clubhouse.

Sarah Hobday came away with the Best Lady title after finishing the competition with 35 points.

Hobday also won the Two’s Club revenues after needing only two shots to hole out from 130 yards on the parfour second hole.

Finishing second overall behind Al Zayed was Charles Dela Cruz, who had 39 points after shooting a brilliant back nine.

In third place with 39 points was Gerry Dunn, who nearly hit a hole-in-one on hole 12.

Rounding out the top six, all of whom came away with a prize, were Irfan Bilal with 38 points in fourth, Manuel Garcia with 37 points in fifth, and Anthony Noone with 37 points, winning on countback, in sixth.

Play at AGC continues on Friday this week with the BMMI Foursomes competition.