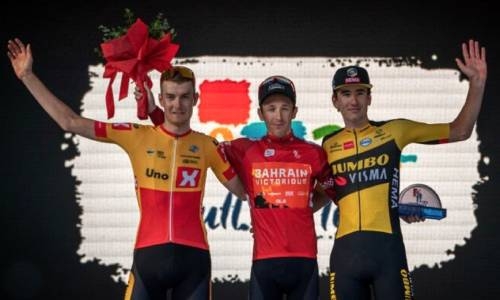 Team Bahrain Victorious had thrice the reason to celebrate yesterday with their riders winning highly competitive elite races in Europe Stevie Williams claimed the overall victory in the General Classification at the 2021 CRO Race in Croatia, where Bahrain Victorious’ riders also won first place in the Teams classification.

To add to that, Bahrain Victorious’ Sonny Colbrelli clinched the win at the 118th edition of the Paris-Roubaix, a one-day professional race in northern France.

In Croatia, the event was a part of the 2021 UCI Europe Tour. Bahrain Victorious were at the top from the start, with Phil Bauhaus winning the first of the race’s six stages.

Williams then moved into the GC lead on the penultimate queen stage, before finishing second on the final day yesterday to secure the overall crown.

After the first overall win of his career, Williams was quoted as saying: “You never start a day expecting for sure, but I was confident in myself and in my team who did an excellent ride, and as a team, we were fantastic all day.

“It was a lot harder stage than I predicted. In the end, it was pretty tactical the way it all happened, but all stage, it was pretty demanding, windy, quite technical, lots of changes of directions. My teammates brought me perfectly to the circuit and gave me the best chance to stay safe and go for myself.

“As a team, we did a great job the whole week, and I am proud to be a part of it. This win is a team victory.” In France, Colbrelli edged a threeway sprint finish to win a rain-hit Paris-Roubaix.

Colbrelli caked in mud after the 258km race, held his bike aloft after crossing the line, then collapsed in tears and rolled around on the grass. “I can’t believe it—my first Paris-Roubaix and this happens,” Colbrelli was quoted as saying. “I’m very happy because it was a legendary Paris-Roubaix with the rain.

In the finale, I did a super sprint. “That was close! In my dream races, Tour of Flanders is first and Paris-Roubaix is second. This is my year. I’m very happy.”