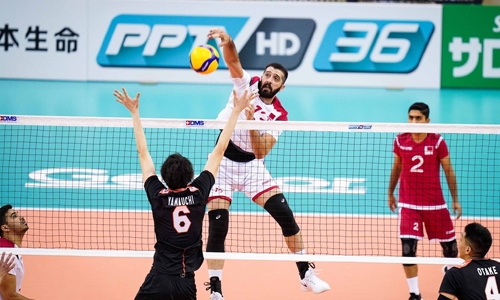 Bahrain were dealt a tough 1-3 (25-23, 17-25, 23-25,16-25) defeat to hosts Japan yesterday in the 21st Asian Senior Men’s Volleyball Championship. The result followed the Bahrainis’ straight-sets victory over India in their first Pool A game and they now have a 1-1 win-loss record.
They now must take their final fixture of the preliminary round against Qatar today in order to move on to the next stage. The game is scheduled for a 6am start, Bahrain time, and it will be played at Chiba Port Arena. The Japanese are already assured a spot in the ensuing phase following their second win.

Bahrain and Qatar are tied on three points apiece on the Pool A standings and both teams have all to play for in today’s clash. The Qataris won against their Indian counterparts 3-0 (25-22, 25-14, 25-20) in yesterday’s other group fixture. India have been eliminated from title contention and will play in the ninth to 16th classification bracket following their last assignment against the Japanese, also set for today.
In Bahrain’s game yesterday, the nationals had a promising start as they were able to eke out a tightly contested first set with three straight stuff blocks. Japan bounced back and convincingly took the second, but the Bahrainis fought hard in the third in their attempt to take the match advantage, but a series of errors proved costly and the Japanese took the 2-1 lead by just two points. In the fourth set, the home side pulled away as Ran Takahashi proved too strong, powering Japan forward with a gamehigh 26 points.

Defending champions Iran, Pakistan, Thailand and Hong Kong are in Pool B, while Pool C consists of reigning silver-medallists Australia, China, Sri Lanka and Kuwait. South Korea, Chinese Taipei, Kazakhstan and Saudi Arabia make up Pool D. The top two teams from each group make it to the round of eight.
The semi-finals are scheduled for September 18, while the bronze and gold medal games are set for September 19. This year’s championship is Bahrain’s 10th participation in the continent’s leading event.