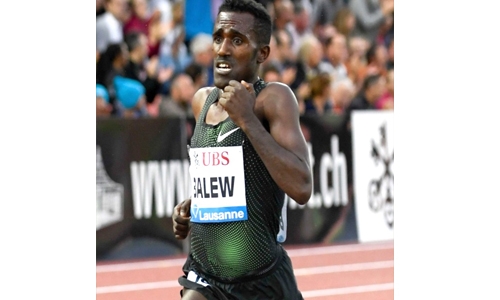 Balew finished a solid seventh in the 5,000m race with his season’s best time of 12 minutes 57.71 seconds, beating the Olympic entry requirement of 13:13.50. Winning the run was Jakob Ingebrigtsen of Norway in a world-leading time and area record of 12:48.45. Hagos Gebrhiwent of Ethiopia was the runner-up in 12:49.02, while Mohammed Ahmed of Canada took third place in 12:50.12.

Finishing in front of Balew from fourth through sixth, respectively, were Mohamed Kair of Spain in 12:50.79, Justyn Knight of Canada in 12:51.93 and Joshua Cheptegei of Uganda in 12:54.69. Aside from the 5,000m, Balew has also already achieved the Olympic qualification mark for the men’s 10,000m with a race result last month.

He is currently ranked 10th in the world in the men’s 5,000m, and 11th in the 10,000m. The qualification system for the Tokyo Olympics is currently scheduled to end on June 29.

It is primarily based on athletes’ world rankings, but the sport’s global governing body, World Athletics, continues to set qualifying times for those athletes with exceptional performances unable to qualify through their world ranking. Bahrain can enter up to three qualified athletes per event at the Olympic Games.