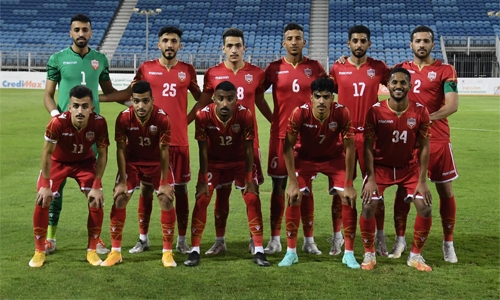 On target for the hosts were Ahmed Alsherooqi and Adnan Fawaz Al Shara’a in the first half, while Saleh Mohammed scored in the final 45-minute period. The game was part of both teams’ preparations for the West Asian championship, as well as the qualifying process for the AFC U23 Asian Cup 2022.

The qualifiers are set to be held from October 23 to 31 in a centralised format. Both sides are set to meet once again in another tune-up game scheduled for Monday. The Jordanians are the third team the Bahrainis have played in friendly games held in the Kingdom over the past weeks.

The others were the UAE and Oman. The U23 Asian Cup is to be held in Uzbekistan from September 6 to 25 next year. Bahrain is one of 46 nations that will be vying for 15 spots in the tournament. South Korea are the competition’s defending champions.

The previous edition was held last year in Thailand. The Bahrainis also participated then, but bowed out of contention in the group stage, where they were drawn with Australia, Iraq and hosts Thailand. They ended the competition with two draws and one loss.