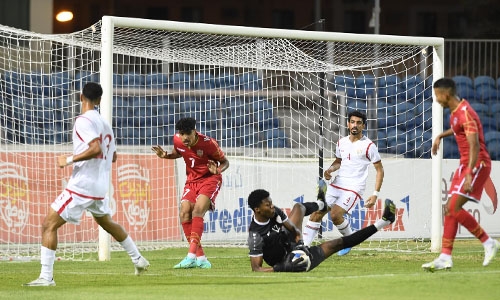 Substitute Saleh Enad curled in the winning goal in the ninth minute of stoppage time to help lift Bahrain’s under-23 Olympic football team to a last-gasp 1-0 victory over their counterparts from Oman last night, in an international friendly match played at the Khalifa Sports City Stadium in Isa Town.

Enad fired in a free-kick from a few metres outside the box into the bottom-right corner of goal, away from the reach of a diving Omani goalkeeper.

Enad’s effort was eventually the final kick of the contest. Just five minutes earlier, fellow-sub Sayed Mohammed made a crucial clearance off the goal line after Oman’s Issam Khamis Al-Makhzoomi beat Bahrain goalkeeper Ammar Mohammed Abbas with a shot right in front of the goal.

Abbas had just made a save on the shot of Hussain Said AlShahri, and the ball rebounded to Al-Makhzoomi, who looked to pounce. But Mohammed was able to slide to the ball and kick it away just in time before it went into the net.

The game was part of both teams’ preparations for the West Asian championship as well as the qualifying process for the AFC U23 Asian Cup 2022.

The qualifiers are set to be held from October 23 to 31 in a centralised format. Bahrain and Oman are set to play in another friendly, which is scheduled for Tuesday.

The Omanis are currently in the Kingdom for a training camp. The tune-up games against Oman are following another set of friendlies played against the UAE in the past fortnight, both of which the Bahrainis lost. Bahrain will be facing another opponent in two more friendlies in the coming week.

Bahrain is one of 46 nations vying for 15 spots in the tournament. The Uzbeks are already assured of a place as hosts. South Korea are the competition’s defending champions.

The previous edition was held last year in Thailand. The Bahrainis also participated then, but bowed out of contention in the group stage, where they were drawn with Australia, Iraq and hosts Thailand. They ended the competition with two draws and one loss.