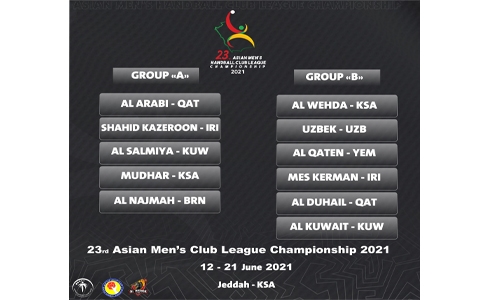 Back-to-back Bahrain league champions Al Najma have been drawn in a tough Group A for the 23rd Asian Men’s Club League Handball Championship 2021.

The other teams in their division are defending champions Al Arabi of Qatar, Shahid Kazeroon Club of Iran, Al Salmiya of Kuwait and Mudhar of Saudi Arabia. Group B consists of Al Wehda of Saudi, Uzbek Club of Uzbekistan, Al Qaten of Yemen, Mes Kerman of Iran, Al Duhail of Qatar and Al Kuwait Club of Kuwait. The draw was held at King Abdullah Sports City in Jeddah, setting the stage for the preliminary round of the competition, which is scheduled to take place from June 12 to 21.

Najma head into the tournament as the only Bahraini side. They are the only club from the Kingdom to have won the championship in the past, having taken the 2017 title when the event was played in Hyderabad, India. Najma has also won the silver and bronze medals once each. Other Bahraini teams to taste success in the competition are Al Hilal Club, who has won bronze twice before; and Al Ahli and Barbar, who have each one third place once.

The clubs championship was supposed to be played last year but was postponed by the Asian Handball Federation due to the COVID-19 pandemic.