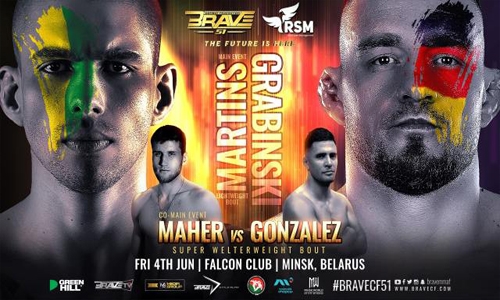 The fastest-growing MMA organization in the world, BRAVE Combat Federation will return to Europe with yet another huge fight card, showcasing the continental talents against top fighters worldwide. And the main event of BRAVE CF 51: The Future Is Here relates to that as perhaps the number one fighter in Germany Marcel Grabinski takes on Brazilian former world champion Lucas ‘’Mineiro’’ Martins in a Lightweight battle. Both men are heavily featured in the official poster that has just been released by BRAVE Combat Federation.

Donning the colours of their flags on their faces, Grabinski and Martins are joined on the poster by the co-main event fighters. A two-division champion in Germany, Grabinski made waves last month as he dismantled Issa Isakov in a Super Lightweight bout on the historic BRAVE CF 50 fight card. Now he will look to join the mix of top fighters at Lightweight with a win over Martins. Lucas ‘’Mineiro’’ Martins is going for his fifth main event for BRAVE Combat Federation but is eager to showcase that he will not be a stepping stone to the up-and-comer Grabinski and is looking forward to getting back to winning ways in Minsk.

Denis Maher will be among the Belarus representatives, and will be making his international debut on home soil, as he takes on Sweden’s Fernando Gonzalez in a Super Welterweight matchup of epic proportions. Maher, who is widely known as one of the biggest rising stars in the region, is one of Belarus’ best kept secrets and will look to announce himself in a big way on the world stage. BRAVE CF 51: The Future Is Here takes place on June 4th at the Falcon Club, in Belarus, Minsk, and will be held in association with Rukh Sports Management.

BRAVE CF 51 will feature athletes from Brazil, Germany, Sweden, Belarus, Russia, France, England, Kyrgyzstan, Afghanistan and Turkey in yet another international fight card brought to the fans by the truly global organization in the MMA world.