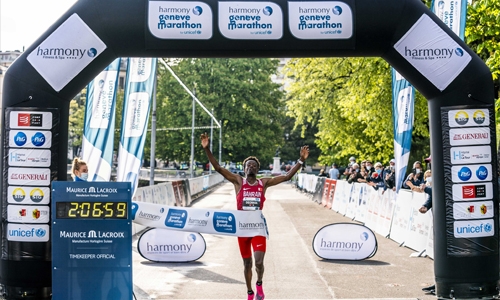 Bahraini elite athlete Shumi Dechasa powered to a record-breaking victory yesterday in the Harmony Geneva Marathon for Unicef, held in Switzerland, and in the process secured qualification for this summer’s Tokyo Olympic Games in Japan.

He was the leader for much of the race, already ahead at the 3.5km mark before dropping to third at 28km. But the 31-yearold moved back to the front by 31.5km, and held on to his advantage from there until the finish past 42km. With his result, Dechasa easily achieved the entry standard for the Olympics of 2:11:30.

Meanwhile, also securing a berth in the Tokyo Games was Bahraini elite sprinter Edidiong Odiong. Competing in a race in Florida, Edidiong clocked a mark of 22.80 seconds to match the entry standard for the women’s event.

With the results, Bahrain Athletics Association general secretary Yousef Ahmed expressed his delight with the two athletes achieving the qualification standards for the Olympics. He wished them further success in their upcoming races and preparations for the Tokyo Games.

Travel suspension for Saudis to be lifted on May 17