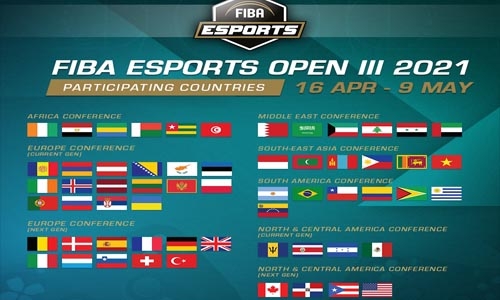 Bahrain have been placed in Group Two of the Middle East Conference for the upcoming FIBA Esports Open III. The online tournament, which features the NBA 2K21 video game, tips off on Friday.

Following the success of the previous editions of the competition, 60 national teams from all over the world are taking part in this event. As in the previous edition, there will be six regional conferences. Six teams will battle it out in South-East Asia, Africa and Middle East Conferences while North and Central America will have eight sides.

South America will have seven teams while 28 will play in the Europe Conference. Bahrain is joined in the Middle East Conference by Saudi Arabia, Kuwait and Syria in Group One, and by Lebanon and the UAE in Group Two.

Group stage games are scheduled for Friday and the best-of three Play-Off series will follow on Saturday and Sunday. All games, just like previous editions, will be available on FIBA’s digital channels with live content being streamed across Facebook, Twitch and YouTube channels.

Group stage games will be shown on Facebook and YouTube and commentated by remote casters thanks to the partnership between FIBA and the commentating platform Spalk, while all Play-Off games will be fully produced from FIBA’s virtual studio in Latvia.

The FIBA Esports Open has grown in popularity since its inception, with 17 national teams having taken part in the inaugural competition last June and then 38 in the recent FIBA Esports Open II. Argentina, Australia, Cote d’Ivoire, Saudi, Turkey, and USA were all victorious in their respective regional conferences during the Esports Open II, which took place over three weekends across November and December in 2020.

Australia, Argentina, Italy, the Philippines and Saudi topped their respective conferences and emerged victorious at the first-ever open held earlier last year. More information on the FIBA Esports Open III are available on the FIBA website.