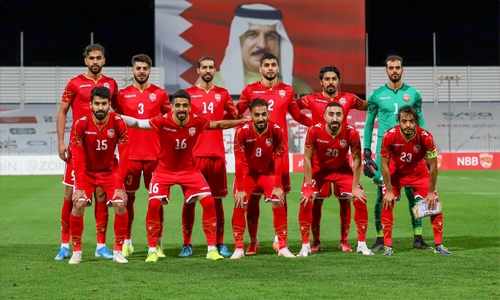 Bahrain lining up May friendly matches

Bahrain is looking to play an international friendly match on May 20, which will be their third in a span of less than 10 days next month as they gear up for their remaining joint-qualifiers for the FIFA World Cup 2022 and AFC Asian Cup 2023.

This was confirmed last night by an official with the Kingdom’s senior men’s national team, who are set to face their counterparts from Ukraine on May 23 in Kiev before playing against Malaysia at home on May 28.

The official explained that the Bahrain Football Association is currently searching for a nation- al team opponent for the May 20 tune-up but none are presently available on that date. He added that a game could therefore be scheduled against a local Ukranian club, to be part of their brief overseas training camp in Kiev that will include the friendlies.

The Bahrainis, coached by Portuguese tactician Helio Sousa, recently completed a local training camp last month that included two friendly matches, the first of which they won against Syria 3-1 before suffering a tough 1-2 loss to Jordan the same week.

Bahrain’s three remaining joint-qualifiers are slated to be held in June. They will be played in the Kingdom after the Asian Football Confederation (AFC) named Bahrain as the centralised venue for Group C, which also includes Iraq, Iran, Cambodia and Hong Kong.

Bahrain is set to go against Cambodia on June 3, Iran on June 7 and then Hong Kong on June 15.

Bahrain is currently second in their division with nine points, having won two matches and drawn thrice. Iraq are the leaders with 11 points after winning three games and drawing two other times.

Iran is third with six points but has played just three matches so far and has two wins and two losses. Hong Kong and Cambodia completed the Group C table with five points and one point, respectively.

There are eight groups in all in this round of qualifiers, with five nations in each group. The other centralised venues selected by the AFC are China for Group A, Kuwait for Group B, Saudi Arabia for Group D, Qatar for Group E, Japan for Group F, the UAE for Group G and South Korea for Group H.

At the end of this stage of qualification, the eight group winners and the four best runners-up advance to the third round of World Cup qualifying, and also secure their berths in the Asian Cup. The next best 24 teams will compete in a separate competition for the remaining 12 slots in the Asian Cup.