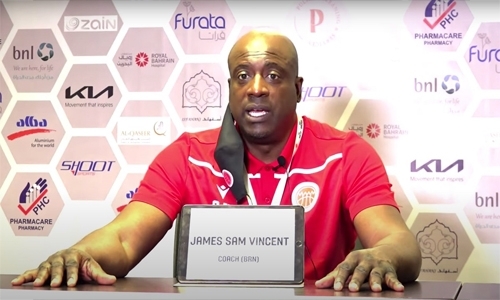 Bahrain head coach Sam Vincent praised the national team’s players for their “fantastic job” in securing a berth in the FIBA Asia Cup 2021, taking place later this year in August.

The Bahrainis completed their qualifying campaign on Monday night with a hard-earned victory over Iraq, giving them an impressive 4-2 win-loss record in a highly competitive group that also featured Lebanon and India.

Bahrain is the lowest-ranked team among the quartet, currently placed 107th on the FIBA World Ranking.

But the nationals showed what they are capable of, and Vincent was pleased with their overall performance in qualification.

“The guys did a fantastic job,” Vincent said during his postgame Press conference following their win over the Iraqis.

“We were able to finish 4-2 in a very competitive pool.”

Bahrain’s two losses were against their Lebanese counterparts, the first of which was a 43-point blowout in Beirut last year.

But the Bahrainis put up a better challenge in the return game this past week, which was an improvement, said Vincent.

The 1986 NBA title-winning former point guard is now aiming to build on that growth ahead of this year’s continental showcase.

“The first game we lost to Lebanon, we didn’t really play well there but we came back and played much better in the game here in Bahrain; had a chance to win that game,” he said. “And then we beat two tough teams: India, ranked much higher, and Iraq, ranked much higher.

“So we feel pretty confident especially playing without some of our key players like Muzamil [Ameer].

We did a pretty good job. “We want to continue to improve and get ready for the FIBA Asia Cup, and that’s what we’ll be focused on in our next camps.”

This year’s FIBA Asia Cup will mark the 30th edition of the continent’s leading basketball championship.

It is currently scheduled to be held from August 16 to 28 in Indonesia, with 16 national teams in the fray.

Both Bahrain and Lebanon have qualified from Group D, while India still has a chance but must play in another tournament to claim one of four remaining berths.

The Bahrainis’ best finish was 10th in the 1999 competition hosted by Saudi Arabia.