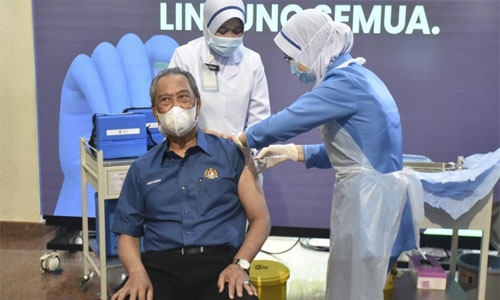 Many nations in the Asia-Pacific region are rolling out the first shots for COVID-19 this week.

Here is a look at major developments:

South Korea’s top infectious disease experts warned that vaccines will not bring the disease to a quick end, and called for continued vigilance in social distancing and mask-wearing as the country prepares to give its first shots on Friday.

Jeong Eun-kyeong, director of the Korea Disease Control and Prevention Agency, said Wednesday it would take a “considerably long time” before the mass vaccination campaign brings the virus under control, The Associated Press reported.

The country aims to vaccinate more than 70% of the population by November. But a safe return to a life without masks is highly unlikely this year, considering various factors including the growing spread of virus variants, said Choi Won Suk, an infectious disease professor at the Korea University Ansan Hospital.

“We are concerned that people might drop their guard as vaccination begins, triggering another massive wave of the virus,” Jeong said.

Jeong spoke as South Korea began transporting the first vaccines rolled off a production line in the southern city of Andong, where local pharmaceutical company SK Bioscience is manufacturing the shots developed by AstraZeneca and the University of Oxford.

The country will kick off the vaccination on Friday starting with residents and employees at long-term care facilities.

Separately, some 55,000 doctors, nurses and other health professionals treating COVID-19 patients will begin receiving the shots developed by Pfizer and BioNTech on Saturday.

The 88-year-old man and 94-year-old woman were being monitored and the doctor who administered the shots had been stood down from the vaccination program, Health Minister Greg Hunt said.

The error occurred at the Holy Spirit aged care home in the Brisbane suburb of Carseldine on Tuesday, the day after the vaccine rollout in Australia began, Hunt said.

“Both patients are being been monitored and both patients are showing no signs at all of an adverse reaction,” Hunt said. He did not say how much more than the prescribed dose was injected.

Lincoln Hopper, chief executive of St. Vincent’s Care Services that owns the home, said he was “very concerned” for the residents’ welfare. The woman remained at the home while the man had been admitted to a hospital, Hopper said.

“This incident has been very distressing to us, to our residents and their families and it’s also very concerning,” Hopper said. “It’s caused us to question whether some of the clinicians given the job of administering the vaccine have received the appropriate training.”

Hunt later revealed that the doctor who administered the overdoses had not completed the online training that all health professionals involved in the program must undertake.

Hunt apologized for earlier telling Parliament that the doctor had been trained. He said he had asked the Health Department to take action against the doctor and the company for which the doctor works.

Another 117,000 doses of AstraZeneca are expected later Wednesday.

Later this year, local manufacturer Siam Bioscience will supply 200 million doses of the AstraZeneca vaccine for the region, of which 26 million are allocated for Thailand. Thai officials have said they had secured an additional deal with AstraZeneca for a total of 61 million doses.

Many critics and opposition parties have criticized the government’s procurement plans as too slow and inadequate.

Thailand, whose economy relies on income from tourism, is aiming to inject 10 million doses a month from June. It plans to inoculate at least half the population by the end of the year.

“I did not feel anything at all. It was all over before I realize it, just like a normal injection. Don’t worry, come forward anytime,” he said at a ceremony broadcast live.

Health Director-General Noor Hisham Abdullah was also among the first to be vaccinated.

Malaysia, which has signed deals with several vaccine suppliers including Pfizer and AstraZeneca, aims to vaccinate up to 80% per cent of its 32 million people by next year.

More than half a million health care and front-line workers will be given priority in the first phase.