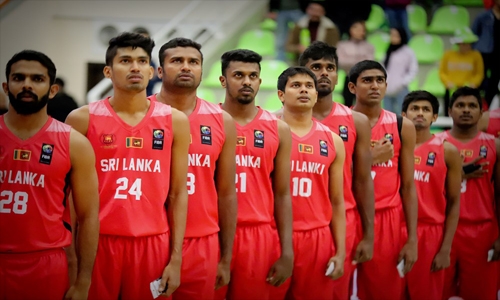 Sri Lanka faces off with Kazakhstan this afternoon as the third and final window of FIBA Asia Cup 2021 qualifiers being held in Bahrain tip-off today.

The contest is scheduled for a 4 pm start and it will be held behind closed doors at the Khalifa Sports City Arena in Isa Town.

It will be the first time both teams will be facing each other in the qualifying competition.

Sri Lanka is expected to turn to top players Pawan Samira Milidduwa Gamage and Clinton Stallone Thevakumar in the clash.

They were their two key men back in the first window.

For the Kazakhs, they have a pair of high-calibre players that can cause big-time problems, such as Anthony Clemmons and Alexandr Zhigulin.

Today’s game is the first of eight fixtures taking place over five days in the Kingdom, which is hosting games in both Groups D and F.

Sri Lanka and Kazakhstan are in Group F along with Palestine and Jordan.

The Jordanians were also set to take part in this window of action, but due to positive COVID-19 tests amongst the delegation, their games have been postponed. Both the Sri Lankan and Kazakh national teams participated yesterday in the official photo shoot, held before the start of the action. The qualification battle in Group F is tight with all four teams currently within just two points of each other.

Jordan leads after taking two wins from two games, but Kazakhstan and Palestine follow with one win apiece.

Sri Lanka is currently last in their division with two losses, but all four teams still have four games each to play.

Following today’s action, Kazakhstan will be back on the hardwood tomorrow when they take on Palestine.

This has been dubbed as one of the games to watch in Bahrain.

In their first meeting, Kazakhstan eked out a 79-76 win.

Palestine’s Sani Sakakini erupted for 44 points in that game, which still stands as single-game high among all Continental Cup Qualifiers game and the only 40-point game so far.

They have also brought in players who were recently based abroad in Kyndall Dykes and Jamal Mayali, both of whom are expected to make significant contributions.

Hosts Bahrain begin their qualifiers on Saturday against Lebanon.