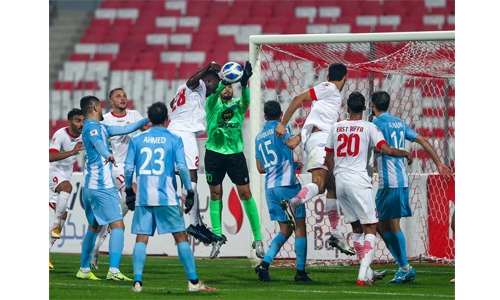 Al Ahli and Riffa set up last night a thrilling final clash for this year’s His Majesty the King’s Cup.

Ahli booked their tickets to the title game with an upset, come-from-behind 5-3 victory in a penalty shootout over last year’s runners-up and defending league champions Hidd. The match had ended 2-2 in regular time.

The result continued their dream run in Bahrain’s richest football competition, and it gave Ahli their first appearance in the King’s Cup final in 2006.

Riffa, on the other hand, edged past East Riffa 2-1 in an action-packed derby that was only decided in the last few minutes.

National team midfielder Mohammed Marhoon starred for Riffa, scoring a brace in the contest including the winning goal in the 84th minute.

The final has yet to be scheduled by the Bahrain Football Association.

Ahli will be gunning for their ninth King’s Cup crown in the history of the competition.

Riffa will be out to claim their seventh crown, having previously triumphed in 2019, which was also the last time they played in the championship match.

In Ahli’s win, Ebrahim Ahmed Habib put the victors ahead 4-3 in the shootout, and then-teammate and goalkeeper Abdulla Hasan Aldawadi made the decisive save on the penalty kick of Hidd’s Moses Atede Jona.

That left it for Hamaza Alsenhaji to seal the victory on Ahli’s ensuing effort, and he made no mistake with his spot-kick to send his team through.

Prior to Habib’s goal, both sides had yet to miss, with Jamal Rashed, substitute Baqer Mohammed Alasfoor and Isa Ahmed Khalib all finding the net for Ahli, and Mohammed Abdulwahab, Abdulla Abdo and Sayed Mohammed Adnan all successful with their replies.

Comeback Ahli had to battle hard to send the match into the shootout after trailing twice in the game and only scoring their second equaliser in the second minute of stoppage time.

Abdulwahab and Rashed had both found the net with penalties in the first half, but then Brazilian Erick Luis Palma scored just 11 minutes from regular time to give Hidd the late 2-1 lead.

Palma fired home off a cross from the right-wing sent in by Ali Abdulla and cleverly set up by Abdo right in the face of goal.

His strike appeared to send Hidd on a return trip to the tournament final, but Ahli broke their hearts in the game’s dying minutes. Pressing hard to level the proceedings, Ahli’s efforts were rewarded when Alasfoor received a brilliant through-pass from Nigerian teammate Emmanuel Edmond in the box, and Alasfoor hit a left-footed shot across the goal into the bottom-right corner of the net. The match went straight to the shootout from there.

Meanwhile, Riffa edged past neighbours East Riffa in a tightly contested affair that had a tense finish. Marhoon had opened the scoring in the match’s 30th minute with a brilliantly hit curling free-kick from just outside the box.

That was enough to give his team the lead heading into the interval.

East Riffa replied immediately in the second half, however, with Faisal Bu Dahoom heading home in the 52nd minute off a cross from Brazilian Luiz Fernando Correa Sales.

With just six minutes to go in regular time, Marhoon supplied the winner with a high curling shot from an acute angle, as he caught Al Dossary off his line.