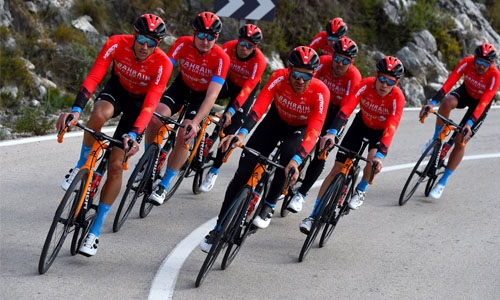 Team Bahrain Victorious, the Kingdom’s leading international cycling outfit founded by His Majesty the King’s Humanitarian Works and Youth Affairs representative and Supreme Council for Youth and Sports chairman His Highness Shaikh Nasser bin Hamad Al Khalifa, has named a seven-member squad that will be competing in its first ride of the 2021 season.

Getting underway tomorrow in France will be the sixth Tour de la Provence. The road cycling event is part of this year’s Union Cycliste Internationale (UCI) Europe Tour, which is under the UCI Continental Circuits series.

The race is to be held in the Provence region of France, and it is set to feature four stages.

This year’s opening stage covers 182.3km, from Aubagne to Six-Fours-Les-Plages.

The riders will start the second stage in Cassis, a popular tourist destination famous for its cliffs, finishing 174.6km later in Manosque, the largest town and commune in the Alpes-deHaute-Provence in southeastern France.

The third stage of 153.9km is where the general classification will most likely be decided with a mountain-top finish on Mont Ventoux.

The climb will be an excellent rehearsal for all the riders heading to Tour de France this season, where it features on Stage 11.

The last 163.2km stage starts in Avignon and concludes the race at Salonde-Provence.

Bauhaus will aim for the win on stages one and four, Teuns will try to win stage two, and Haig, Poels and Teuns will target stage three with the mountain top finish. “I’m motivated to race again, and the Tour de la Provence is a perfect start, with a few stages that fit me very well,” commented Teuns before the race.

Poels is also looking forward to the first race of the season. He said: “I had a good winter and successful training camp with the team. I believe we have a strong line-up, and I’m curious to see how the first race of the year will turn out.” Jack Haig shares the excitement of his co-riders.

He added: “I am excited but also a little nervous.

That will be my first race with the new team, and it’s also a race I haven’t done before.

I think it will be a good race to know how the team works and how I fit into the team. It’s also some rehearsal for some of the big races coming up, especially the UAE Tour, which will be my first race directly after Tour de la Provence.” Sports director Rolf Aldag reveals the strategy for the first race of the season. “We had a super good training camp with the whole team, and now we are looking forward to scoring results in the first race of the season,” he said.

Team Bahrain Victorious is supported by the Bahrain Economic Development Board, Bapco, Batelco, National Bank of Bahrain and Alba, amongst many others.