BRAVE CF 46: Bogatov laughs off ''low blows'' comments from Akishev: 'I have four kids, so I'm good' | THE DAILY TRIBUNE | KINGDOM OF BAHRAIN 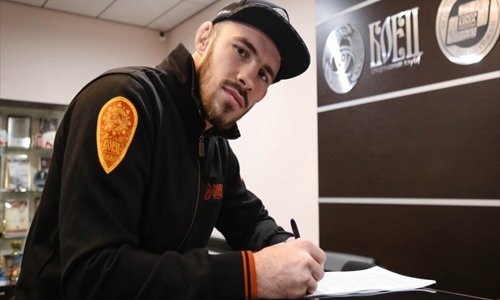 Roman Bogatov is one of the top prospects from Russia and will make his anticipated return to action at BRAVE CF 46, which takes place in Sochi, Russia, on January 16th. The show will be conducted in association with Krepost Selection.

He has gained a huge level of fame and unintended notoriety among MMA fans after his most recent fight. The bout which ended in a loss for the Russian result witnessed several illegal strikes to the groin by Bogatov.

Unfortunately for Bogatov, the numerous illegal strikes were what stuck out as the most memorable from the bout. As a result, the media talking points, as well as fan chatter surrounding Bogatov, have been fixated on the low blows. Most recently, his BRAVE CF 46 opponent Nurzhan Akishev poked fun by warning the Russian to keep the fight clean. "Fans told me to be careful with my balls (laughs). I have a message for Roman. Let's do a clean fight, because I want to have a big family, please" Akishev quipped

Taking humour in his stride, Bogatov kept it cool during his IG Live Interview, responding to Akishev saying, "I have four kids already, so I am not worried about that". Banter aside, Bogatov is certain that he will not be making the same mistakes again. "If you analyze, that fight was the only time that this happened. So it is not that I always do this to my opponents."

The matchup could lead to an exciting fight, according to Bogatov. "He is a fighter with fast hands. Almost all of his fights have ended in finishes. It is the same with me, I like to either KO/TKO or submit my opponent. So this fight would be an exciting one to watch".

BRAVE CF 46 takes place at the WOW Arena and will be headlined by a world title fight between reigning Super Lightweight champion Eldar Eldarov and top contender Leonardo Mafra. Other notable Russian stars will also be in action, such as Ali Bagautinov, Konstantin Erokhin, and Rustam Chsiev.