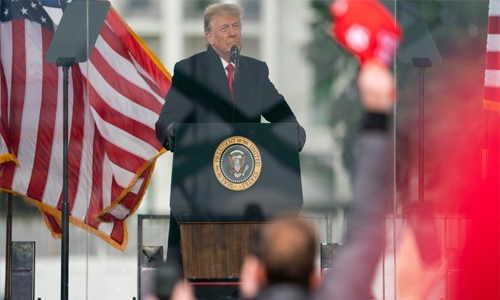 Biden defeated Trump by 306-232 electoral votes and he will be inaugurated January 20.

The House and Senate certified the Democrat’s electoral college win on Thursday after a violent throng of pro-Trump rioters spent hours Wednesday running rampant through the Capitol.

A woman was fatally shot, windows were bashed and the mob forced shaken lawmakers and aides to flee the building, shielded by Capitol Police, the Associated Press reported.

President Donald Trump now said there “will be an orderly transition on January 20” after Congress concluded the electoral vote count certifying President-elect Joe Biden’s victory and after a day of violence when his supporters stormed the U.S. Capitol.

Trump says in a statement tweeted by his social media director Dan Scavino, “Even though I totally disagree with the outcome of the election, and the facts bear me out, nevertheless, there will be an orderly transition on January 20.”

“I have always said we would continue our fight to ensure that only legal votes were counted. While this represents the end of the greatest first term in presidential history, it’s only the beginning of our fight to Make America Great Again.”

Trump has spent the last two months refusing to concede the election and making baseless allegations of mass voter fraud that have been rejected by dozens of courts and Republican officials, including his former attorney general.

The Capitol rampage began shortly after President Donald Trump repeated his unfounded claims of election fraud to thousands of rallying demonstrators he had invited to Washington. Many then surged to the Capitol after he incited them to go there as lawmakers debated the electoral votes.

More than six hours after the violence erupted, lawmakers resumed their session.

The assault on the Capitol made some Republicans squeamish about trying to overturn Biden’s win, and challenges were lodged only against Arizona and Pennsylvania. Both efforts lost overwhelmingly.

Exposure to dirty air in the world's most polluted region linked to pregnancy loss, study finds