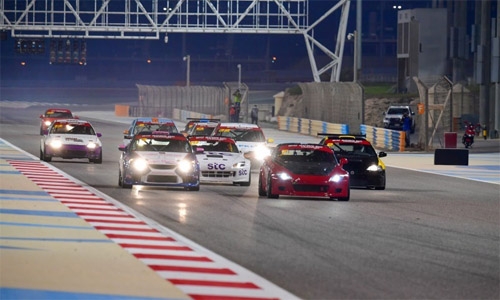 Bahrain International Circuit (BIC), “The Home of Motorsport in the Middle East”, is kicking off the new year in style with its first major race weekend of 2021: The Gulf 12 Hours Bahrain.

Taking place from Thursday to Saturday (January 7 to 9), the popular endurance racing event organised by Driving Force Events will take to the Sakhir race track for the very first time.

It will be bringing together GT teams and cars from all over the world, competing in the GT3 and GT4 categories. Lining up on the grid will be a total of 12 challengers featuring some of motoring’s biggest global brands, including McLaren, Mercedes, Ferrari, Bentley, BMW, Audi and Porsche.

Seven-time MotoGP World Champion Valentino Rossi is set to suit up in a Ferrari 488 GT3. It will be his second participation in the race, after also competing in the 2019 edition.

Also set to hit the Tarmac will be Bahraini racing team 2 Seas Motorsport, with a driver line-up that includes His Highness Shaikh Isa bin Abdulla Al Khalifa. It will be the team’s first competitive drive of the year following a successful maiden campaign in 2020, which included impressive results in the British GT Championship.

Action in the Gulf 12 Hours Bahrain will be supported during the weekend by the BIC 2,000cc Challenge.

Racing will take place along BIC’s 5.412-kilometre Grand Prix track, and it begins on Thursday with the first Practice session for the GT teams. Practices continue on Friday along with Qualifying, while the race will be held on Saturday over two parts, first between 9.30 am and 3.30 pm and then from 5.30 pm to 11.30 pm. The podium ceremony will follow at 11.35 pm.

The Gulf 12 Hours is traditionally held each year in Abu Dhabi, but event organisers made the switch to Bahrain, and will instead hold its race at the UAE capital on December 18 as a second event this year.

The Gulf 12 Hours Bahrain is the second major endurance meeting at BIC in just two months, following the 8 Hours of Bahrain of the FIA World Endurance Championship, which took place last November at BIC.