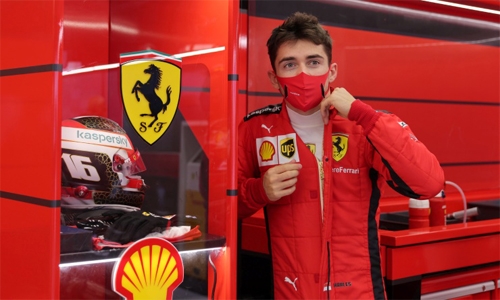 Ferrari’s Charles Leclerc says he would bet on George Russell winning Sunday’s Sakhir Grand Prix when the Briton makes his Mercedes debut as Lewis Hamilton’s replacement in the penultimate race of the season.

Russell, 22, has yet to score a point in 36 races with struggling Williams but he could go from zero to hero in Bahrain after seven-time world champion Hamilton tested positive for COVID-19.

Mercedes have won 13 of the 15 races this season -- Hamilton 11 and Valtteri Bottas two -- and been on pole position in all but one.

“I think he will show how much of a good driver he is this weekend,” said Leclerc when asked what Russell might be capable of achieving.

“A podium at least, but I have some hope of a win. I mean, it’s very optimistic but I know he’s very good. I could bet on a win.”

The Monegasque is one of a group of young racers who grew up together and progressed through the junior rankings -- and who still have a close bond maintained this year through virtual races when COVID-19 closed everything down.

Leclerc, 23, was Formula Two champion in 2017, Russell in 2018. McLaren’s Lando Norris, 21, runner-up to Russell in Formula Two, is another of the gang and he too felt sure Russell would shine.

He said he had sent a congratulations message before the news was announced, because it was so obvious he was going to get the drive.

“He’s probably going to score his first points in Formula One and a high chance to score a podium and maybe even a win. I wish him all the best,” the Briton told Reuters.

Norris will be the highest-ranked British driver at the start in Hamilton’s absence, currently seventh overall, but he knows it is a hollow boast given the car Russell has at his disposal.