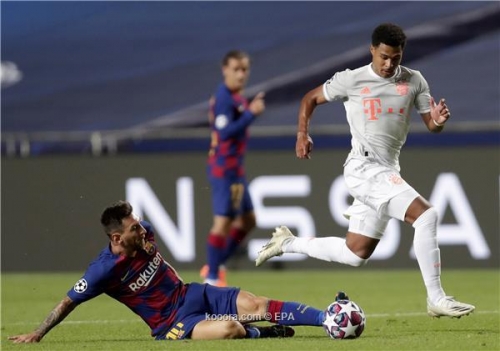 As soon as Cristiano Ronaldo's positive test for the coronavirus was announced on Tuesday, the football community started wondering whether he would be allowed to play against Lionel Messi. The showdown between the two superstars is scheduled for October 28 when Ronaldo's Juventus play Messi's Barcelona in the Champions League.

Ronaldo is the most prominent absentee when the elite event kicks off with matchday 1 on Tuesday and Wednesday, one month later than usual owing to the pandemic. Last season's runners-up Paris Saint-Germain may meanwhile be relieved that their stars including Neymar and Kylian Mbappe have long recovered from coronavirus infections, just as Paul Pogba from their first opponents Machester United.

All this shows just how uncertain everything is and the rising number of infections across Europe over the last weeks will only add to concerns. The ruling body UEFA has worked out a strict hygiene and safety concept and also takes into account possible cancellations of matches by giving a January 28 deadline should the group stage not be completed as planned by December 8 and 9. And should the group stage not be completed at all, UEFA said its executive Committee "will decide on the principles for determining the clubs qualified for the round of 16 of Champions League."

UEFA aims to complete the campaign with the final set for May 29 in Istanbul. Istanbul was originally the 2020 final host city but that campaign ended in a one-legged mini-tournament in Lisbon in August from the quarter-finals onwards to minimize infection risks. But now the play-offs have seen home and away ties again, and UEFA is also learning from Nations League matches where national teams are traveling across the continent. "We have a very strong health concept," UEFA president Aleksander Ceferin told German broadcasters ARD this week. "We have had more than 420 international matches since August, only within UEFA, without any serious incident."

Ceferin spoke of a "terrible" and "unpredictable" situation, not only for football but also insisted that sport in general "gives the people hope." Ronaldo showcases the unpredictability of the Sars-CoV-2 virus.

He swapped a Juventus team bubble for a Portuguese national team bubble, only to test positive a week later, while all team-mates were negative - leaving Portugal coach Fernando Santos at loss for an explanation because "we have been completely locked in." Now Juve is back in a team bubble after midfielder Weston McKennie tested positive.

Positive tests within teams are however no reason per se to cancel matches as UEFA coronavirus regulations say that "if at least 13 players registered on the A list (including at least one goalkeeper) are available, the match must go ahead on the scheduled date."

National quarantine rules and travel restrictions could force matches to be played at neutral venues, and teams risk forfeiting matches for not showing up.

UEFA has given clubs a deadline of October 5 for matchdays 1-3 and November 9 for matchdays 4-6 to inform about travel restrictions but with the pandemic gaining speed again governments could well issue restrictions at very short notice, in case of which clubs must then "immediately" inform UEFA. The presence of fans also hinges on decisions from national authorities after UEFA said that in principle up to 30 percent of stadium capacity could be used, after a successful trial of returning supporters to the stadium for the European Super Cup last month.

Ceferin spoke of a "sensible first step which puts fans' health first and respects the laws in each country." But title holders Bayern Munich will definitely have no fans when they start with a difficult match against Atletico Madrid because Munich authorities are prohibiting fans at matches until October 25.

Clubs are pretty much used to playing behind closed doors these days, though, and will be more concerned about the grueling schedule in a season starting late in all events. That is because everything has to be completed by the end of May because the postponed Euro 2020 tournament is to start on June 11 - the event in 12 cities across the continent another massive challenge for UEFA under the circumstances.

Top clubs will be playing three games a week effectively until Christmas, and their many national team players also had the just-ended October triple-header plus another one in November.

Coaches like Liverpool's Juergen Klopp have criticized the staging of the Nations League but clubs have also bolstered their squads to be prepared for what could be the most demanding season ever in the sport. "We have difficult times. All clubs around the world must deal with them in the right way," Munich director for sport Hasan Salihamidzic said after they signed four players on the last two days of the transfer window.