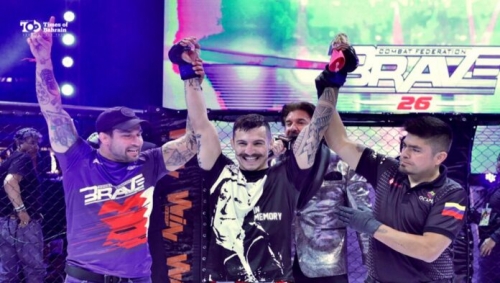 BRAVE Combat Federation, the Bahrain-based Mixed Martial Arts promotion founded by His Highness Shaikh Khalid bin Hamad Al Khalifa, is known as the truly global MMA promotion. And that’s not by chance. Since the beginning of its operations back in 2016, BRAVE CF has the global feature in its DNA and promoted most of the shows overseas, including many international debuts in the host countries. One of the biggest success cases is definitely Colombia.

The South American country was known as a talent factory in the region, under the guidance of the Colombian MMA Federation and the local events. Understanding the need of an international platform for the local athletes, BRAVE Combat Federation started a program focused on empowering the Colombian MMA scene, which included multiple coordinated actions and two international events in the country.

Apart from the chance for the Colombian athletes to compete in an international event, BRAVE CF also brought some of the biggest global MMA stars to compete in the country, offering the Colombian fans the unique chance of witnessing some of the best fighters in the world competing in their home in addition to raising the bar in terms of competition for the local athletes. The strategy has proved itself very successful and quickly Colombia became a key and strategic market not only for BRAVE CF but for the sport of Mixed Martial Arts. The Colombian talent pool grew in depth and business and diplomatic opportunities were created.

BRAVE CF has partnered up with Latin Fighting Championship (LFC), a local organization who has been instrumental in scouting the best local talent with competitions throughout last year. Not only that, but at BRAVE CF 26, the second show hosted in Colombian soil, the Bahraini brand beat the biggest UFC show of the year in ratings throughout the nation with WIN Sports as its broadcasting partner, showcasing the everlasting impact of the organization in the country