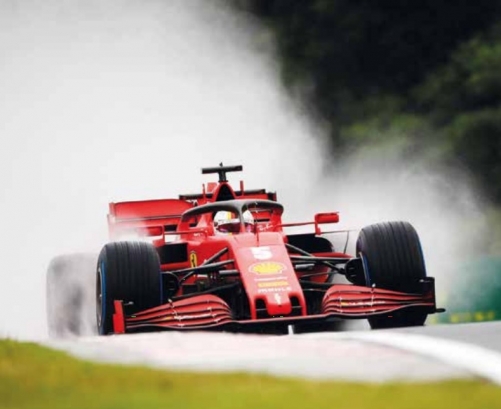 Sebastian Vettel provided a reminder of the talents that won him four drivers’ world titles yesterday when he topped the times for Ferrari in a wet second practice for the Hungarian Grand Prix with Lewis Hamilton opting to sit out the session.

Vettel, looking for a new team for 2021 after being told he will be surplus to Ferrari’s needs, clocked a best lap in one minute 40.464 seconds to outpace nearest rival and championship leader Valtteri Bottas of Mercedes by 0.272s. But it was six-time champion Hamilton, the fastest man in the dry morning session, who remained the ruling force as Mercedes continued to look the dominant team.

For Vettel and Ferrari, it was a welcome boost after last Sunday’s ignominious exit from the Styrian Grand Prix where Charles Leclerc collided with him on the opening lap, causing both men into early retirement. It meant little, however, in the broader picture following Hamilton’s masterful triumph at last Sunday’s Styrian Grand Prix and his 1:16.003 lap on hard tyres, which lifted him clear of Bottas.

Carlos Sainz, the man chosen to replace Vettel at Ferrari, was third fastest for McLaren ahead of Lance Stroll and his Racing Point ‘pink Mercedes’ teammate Sergio Perez. Hamilton was one of several drivers who decided to sit out the session without clocking a flying lap in the difficult conditions. “It was a great first session for us,” he said.

“We got everything that we needed to do done and it was just a shame that it rained as it did. “It’s very strange that here we are in the summer and we have had this rain over two weekends. “It did not leave us with a lot to do in the afternoon session.” He warned against drawing conclusions from yesterday’s action.

“Everyone is doing a different programme, but it was OK, though I expect it to be a lot closer on Saturday.” ‘Tricky in the wet’ Pierre Gasly, who sat out the morning opening session, was sixth ahead of Max Verstappen of Red Bull, Romain Grosjean of Haas, Kimi Raikkonen of Alfa Romeo and Leclerc.

Verstappen, who is expected to mount a serious challenge to the two Mercedes men, said he was disappointed. “It was not so good for us in FP1,” he said. “We have plenty of work to do and it was a shame that we couldn’t do anything in second practice. I am glad we have a night to look at things and to make changes.”

More wet weather conditions are forecast for Budapest and the surrounding region on Saturday, making it likely another wet qualifying session will take place. Last weekend’s qualifying was a thrilling spectacle in which Hamilton produced one of his greatest laps to take pole. “Let’s see what happens,” Hamilton said.

“But, speaking personally, I would prefer it to be dry because I love this track in the dry – it is very tricky in the wet.” Sunday’s race, in its 35th consecutive year, is the third to be run this year in the COVID-19 delayed season and takes place behind closed doors and under strictly-controlled protocol conditions that do not allow anyone from the travelling F1 circus to go anywhere other than their hotels, the circuit or the airport. Bottas won the season-opening Austrian Grand Prix and Hamilton last Sunday’s Styrian Grand Prix. Bottas leads Hamilton by six points in the title race.

Zidane silences the doubters by bringing Real Madrid back to life