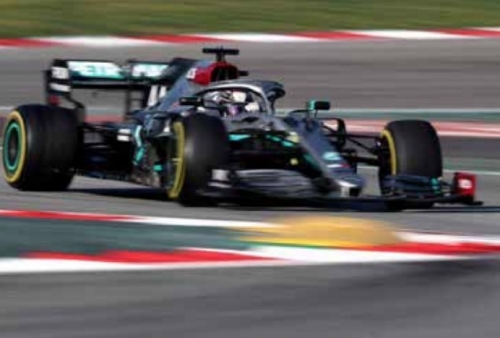 Mercedes announced yesterday an all-new black liveried car for the 2020 Formula One season in support of #BlackLivesMatter with their six-time world champion Lewis Hamilton a vocal supporter of the fight against racism.

F1 emerges from its coronavirus-enforced three-month hiatus in Austria this weekend to a markedly changed world, with the killing of African-American George Floyd in US police custody last month triggering outrage and a global anti-racism movement. Hamilton, the only black driver on the F1 grid, has established a commission which hopes to steer more black youngsters into motor racing.

Mercedes in a statement noted that “in our organisation, just three percent of our workforce identify as belonging to minority ethnic groups and only 12% of our employees are women”. “This lack of diversity shows that we need to find new approaches to attract talent from many areas of society we do not currently reach,” it added.

Whilst expressing pride at the team’s “values and culture” the statement said “the Black Lives Matter movement has shone a searching light on how much we need new measures and actions in the fight against racism and all forms of discrimination”.

“For 2020, we have chosen to race in an all-black base livery as a public pledge to improve the diversity of our team - and a clear statement that we stand against racism and all forms of discrimination.” Team Principal Toto Wolff said “Racism and discrimination have no place in our society, our sport or our team”.

The German added: “But having the right beliefs and the right mindset isn’t enough if we remain silent. We wish to use our voice and our global platform to speak up for respect and equality, and the Silver Arrow will race in black for the entire 2020 season to show our commitment to greater diversity within our team and our sport.”

Hamilton, who starts his quest for a record-equalling seventh title at Sunday’s Austrian Grand Prix, said it was vital “we seize this moment and use it to educate ourselves whether you are an individual, brand or company to make real meaningful changes when it comes to ensuring equality and inclusivity”.

His Finnish teammate Valtteri Bottas said he was “proud to stand with the team, with Lewis and with Mercedes-Benz in making this important statement”. Since easing out of lockdown sports stars have been eager to take a stand against racism, whether by taking the knee, as footballers form the Bundesliga or Premier League have done, or wearing Black lives Matters on the back of their shirts.

Earlier yesterday the West Indies cricket team announced they would be wearing “Black Lives Matter” logos on their shirts during next month’s Test series against England in a show of solidarity with the global movement.

Virtual seminar to be held on protecting commercial accounts