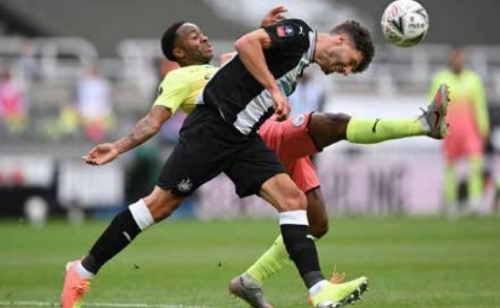 Manchester City’s slim hopes of retaining their Premier League crown have gone but they still have two trophies in their crosshairs, manager Pep Guardiola said after the club reached the FA Cup semi-finals with a 2-0 win over Newcastle United.

As well as the Cup, City are also still in the hunt for the Champions League title and hold a 2-1 lead over Real Madrid from the away leg of their last 16 clash in February before the competition was suspended due to COVID-19. Europe’s elite club competition will be completed with an eight-team mini-tournament held in Lisbon in August.

The FA Cup semis will be held on July 18-19 and the final is scheduled for Aug. 1. “We have two competitions we can win,” Guardiola told reporters on Sunday. “It will be good to arrive against Real Madrid in the best condition. To win this title would be the best way to prepare for Madrid.”

Guardiola also said he was pleased with City’s response after last week’s 2-1 defeat at Chelsea handed Liverpool the Premier League title. “We’re delighted after the defeat against Chelsea to be in London again at Wembley to play against Arsenal in the semi-final to try to reach the final of the FA Cup,” he added. “Always it’s an incredible trophy and it gives us an extra bonus.”