For Sam Patterson, ‘The Future’ is now | THE DAILY TRIBUNE | KINGDOM OF BAHRAIN 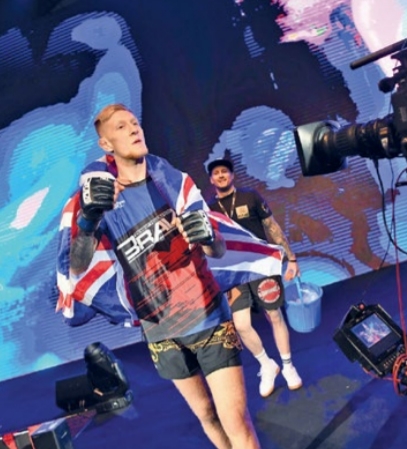 Sam “The Future” Patterson will be a part of his first main event, on April 13th, as BRAVE Combat Federation returns to Romania for BRAVE CF 36. As he takes on John Brewin in the headlining spot, Patterson knows it’s the biggest bout of his career so far - a win against his Kiwi counterpart could potentially leave him on the cusp of a title shot.

Sam is coming off the biggest win of his career, with a thirdround submission victory over famed striker Cian Cowley, after dominating the stand-up against the Irishman. “The Future”, however, feels his second to last fight - a draw against Ahmed Amir, was actually the catalyst for his career surge.

“I learned a lot in that fight. I’ve always been told to never leave it in the judges’ hands. I think I won, but I’m sure Ahmed feels he won too, which is fine. We are all entitled to our own opinions. But that fight taught me so much. I always prided myself on having great cardio, but I never put it to test before. Against Ahmed, I pushed the pace for three rounds and felt great.

That gave me the confidence I needed to go all out from the start”. It was that change in mentality that led Patterson to his career-defining win (so far) in Saudi Arabia. The aggressor from the start, Sam led the way against Cowley, scoring with kicks and stinging jabs, and putting his opponent on the backfoot throughout the fight. It is a strategy that served him well, but now he will face a man just like him in his next outing. Can Patterson take out “Trouble” Brewin and move up in the Lightweight division?