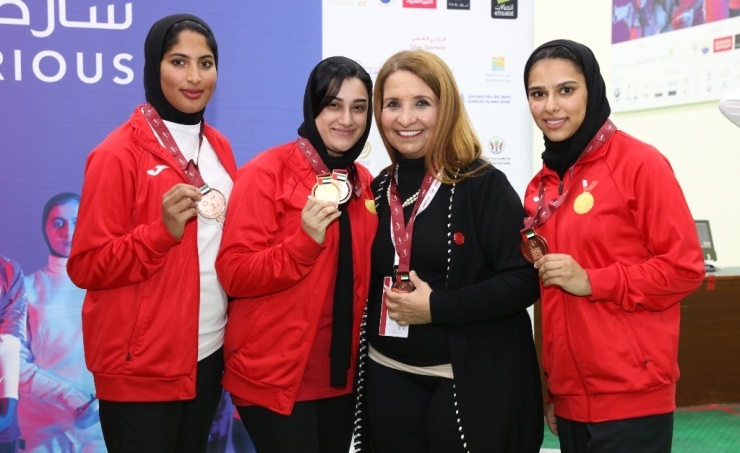 Bahrain Shooting Club made a strong debut in the 5th Arab Women’s Games, being held on February 2-12 in Sharjah, the United Arab Emirates.

Mooza set a personal record totaling 564 points, up by 13 points compared to her performance in the previous edition of the pan-Arab championship.

Mooza who retained her Arab title, was followed by Emirati Wafa Al-Ali and Omani Wadha Al-Balooshi who finished second and third respectively.

The Bahraini shooting team also bagged the bronze medal after finishing third in the contest. The Bahrain shooting team, which shone in the championship, is made up of Mooza Abdulrahim Bucheeri, Badriya Al-Attawi and Mariam Al-Qassimi.

Shaikha Hayat expressed her delight at the performance of the champion Mooza Abdulrahim Bucheeri who won the gold medal, congratulating the Bahraini team on bagging the bronze medal.

A’ali table tennis team also bagged the gold medal thanks to Mariam Abdulla Al-Ali, Fatima Abdulla Al-Alai, which Amrita Bahdaqi was disqualified by the organization committee which contested her registration.

In the fourth match, A’ali defeated Algerian Sports Association 3-1 in a thrilling showdown. The day ended on a high note as A’ali rallied to Saudi Riyadh team 3-1 sealing the final victory for Bahrain.

Al-Ahli lost the first two matches to the Petroleum team of Algeria and Al-Wasl of the UAE.

Riffa, which lost its first match to Al-Fahees of Jordan, will take on Syrian Al-Sahel in its second match on Friday at 11 pm (Bahrain Time).