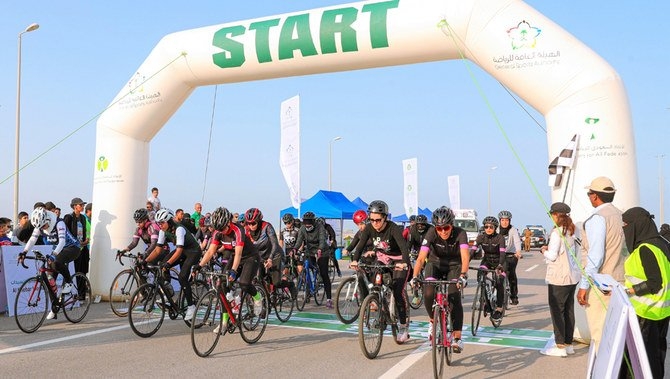 Saudi women lead the way as cycling breaks down barriers

Cycling is one of Saudi Arabia’s fastest-growing sports — and it’s the Kingdom’s women who are leading the way.

The turnout for the competition drew praise from the Saudi Sports for All Federation (SFA), which organized the event, with Shaima Saleh Al-Husseini, SFA managing director, describing the series as “truly a historic occurrence for health and wellness in Saudi Arabia.”

In the final race of the series, held at the Corniche in Alkhobar, Nadia Skoukdi claimed first place, followed by Floria Martias and Nasima Siddikui.

More than 800 women took part in the first race, held at Princess Nourah University in Riyadh, where Skoukdi and Martias were joined by Ahlam Al-Zaid on the finalists’ podium.

Cycling as a sport is growing in popularity across the Kingdom, according to the SFA, which says that about 1.1 percent of the population cycles on a weekly basis. At least 30 percent of cyclists are women, the federation believes.

The Kingdom’s Vision 2030 plan hopes to boost weekly levels of physical activity to 40 percent in the next decade.

Al-Husseini said that the SFA considers physical activity its “mandate,” which translates to more public competitions and events such as the women’s cycling series.

“We will continue to stage activities under the Quality of Life program, and work hard toward our goal to get people involved in sports and activities of all types,” she added.