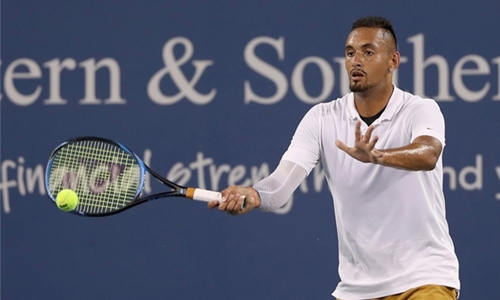 Controversial Australian star Nick Kyrgios was Thursday fined $113,000 (101,701 euros) after his explosive Cincinnati Masters meltdown which saw him smash two racquets, launch an abusive tirade at the chair umpire before appearing to spit at the official. The ATP said the massive sanction included individual fines for ball abuse, leaving the court without permission, an audible obscenity and unsportsmanlike conduct during his second round loss to Russia’s Karen Khachanov.

Kyrgios, 24, was warned that he could also face another suspension from the sport once a full investigation has taken place. After the world number 27 lost 6-7 (3/7), 7-6 (7/4), 6-2 to Khachanov on Wednesday night, he called umpire Fergus Murphy a “tool”, refused to shake his hand while spitting in the direction of the chair. He had earlier been handed a time violation, docked a point and was warned again after leaving the court without permission at the end of the second set after which he was seen to destroy two racquets in the corridor.

Kyrgios screamed at Murphy that he was the “worst umpire, hands down”. The various Kyrgios infractions included four fines of $20,000 each for unsportsmanlike conduct plus another $20,000 for verbal abuse. “In addition to the on-site fines, the ATP is looking further into what happened during and immediately after the match to see if additional action is warranted,” said an ATP statement. “That could result in an additional fine and/or suspension.”

Kyrgios also had a run-in with Murphy at Queen’s Club in June after he accused a line judge of “match-rigging” and was given a code violation by the umpire. At the Italian Open in Rome on the eve of Roland Garros, he was disqualified and fined for throwing a chair on to court. He has also been at loggerheads with the world’s top two players, Novak Djokovic and Rafael Nadal this year. He accused Djokovic of trying too hard to be liked and blasted the Serb’s post-match “cup of love” celebrations as “cringeworthy”.

After beating Nadal in Acapulco earlier this year, the Spaniard said the Australian “lacked respect”. The pair met in a bad-tempered Wimbledon second round match in which Kyrgios admitted deliberately spearing a forehand directly at Nadal.