Nadal, Thiem cruise on | THE DAILY TRIBUNE | KINGDOM OF BAHRAIN 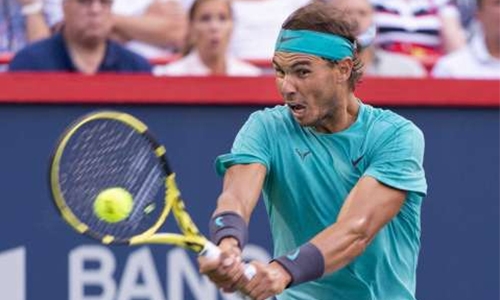 Rafael Nadal stepped closer to a record 35th Masters 1000 title on Thursday, dispatching Argentina’s Guido Pella 6-3, 6-4 Thursday to power into the ATP Montreal quarter-finals. The Spanish world number two has now notched the most wins in the elite series, with his 379th Masters victory surpassing Roger Federer by one.

Nadal, an 18-time Grand Slam singles champion, could add another Masters footnote to his epic resume if he successfully defends his Canadian crown for the all-time trophy mark. He ended the evening with an ace out wide on his fourth match point, moving into his ninth Canadian quarter-final. Nadal will play for a semi-final berth against Italy’s Fabio Fognini after the seventh seed beat France’s Adrian Mannarino 6-2, 7-5. The victory came in blustery conditions, which Nadal said were not a huge bother.

He made good on an impossible sky hook reverse overhead at one point in the contest. “It was a tough day in terms of wind, but we are used to playing like this,” he said. “It can be beautiful to play in tough conditions. The player with more options has the better chance to survive.” Dominic Thiem reached the last eight by defeating Croatia’s Marin Cilic 7-6 (9/7), 6-4, the Austrian’s second victory in two days after waiting five years to break his duck in Canada.

Second seed Thiem, who ousted home hope Denis Shapovalov on Wednesday, faced two break points in the final game against the 2014 US Open champion before securing the triumph on a third match point. Thiem came to Canada after winning the Kitzbuhel clay court title at home last weekend.

Thiem next for Medvedev

The world number four booked a last-eight clash against eighth seed Daniil Medvedev, who eased past unseeded Christian Garin of Chile 6-3, 6-3. Thiem beat the Russian in April to win the Barcelona title. “He’s having a great season, playing unbelievable, solid tennis every week.

It’s going to be very, very tough match. “Barcelona was of course in my favour because it’s clay. We had a great, close match in St. Petersburg, which was a very high level. “I’ll watch that one again, see what I did great there, and try to play similar tomorrow.” Medvedev beat Garin in 69 minutes, breaking the South American four times.

Third seed Alexander Zverev took some quick revenge by beating Nikoloz Basilashvili 7-5, 5-7, 7-6 (7/5) only 12 days after the German lost to the Georgian in Hamburg. Zvereva, the 2017 Montreal winner who remains undefeated in the city, destroyed a racquet in frustration and almost lost his way in the final set. Up a break, he sent over a 10th double-fault to lose serve, 4-4. Only a winning tie-breaker salvaged the victory and set up a last-eight clash with Karen Khachanov.

The Russian sixth seed earned his spot by ousting Canadian Felix Auger-Aliassime on the youngster’s 19th birthday -- he shares one with Roger Federer, now 38. Khachanov administered a 6-7 (7/9), 7-5, 6-3 victory then apologized to the crowd after taking out the last Canadian, but said he thought he got a raw deal from Canadian partisans.