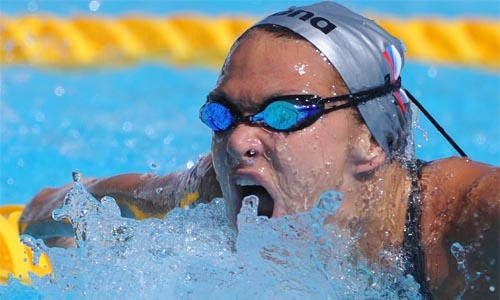 Moscow : Russian Olympic swimmer Yana Martynova has been banned for four years for taking a banned substance, the country's anti-doping agency said on Wednesday, as it grapples with a slew of drug allegations.

Russian swimming has been hit with a series of doping scandals while Russian athletics is striving to overturn a ban by the International Association of Athletics Federations (IAAF) for alleged state-sponsored doping.

The country's anti-doping body RUSADA said that Martynova a three-time Olympian was being banned for four years for "violating anti-doping rules".

She was provisionally suspended in July 2015 after testing positive for the anabolic agent ostarine, swimming's world governing body FINA said.

Swimmer Yulia Efimova, who won bronze at the 2012 London Games and is the current 100m breaststroke champion, was handed a provisional ban in March after testing positive for meldonium, the same medication that saw Russian tennis star Maria Sharapova also banned.

FINA lifted Efimova's suspension last month after the World Anti-Doping Agency WADA said that athletes could escape a ban because it does not know exactly how long it takes for meldonium to leave the body.

FINA said last month that it will pursue a doping inquiry against Efimova despite lifting her suspension. Swimming coaches had expressed dismay at FINA's leniency toward Efimova, who served a 16-month ban after testing positive of the steroid DHEA in late 2013.

WADA said in March that it would launch an investigation into doping in Russian swimming after British newspaper The Times claimed Sergei Portugalov, the doctor said to be the mastermind behind doping in Russian athletics, had pushed swimmers on Russia's national team to take performance-enhancing drugs.

The IAAF will rule on Friday over Russia's participation in the athletics at the Rio Games in August.

Astronomer shares forecast for first day of Eid in UAE