Will far-right hijack of EU elections finish off liberal democracy? | THE DAILY TRIBUNE | KINGDOM OF BAHRAIN 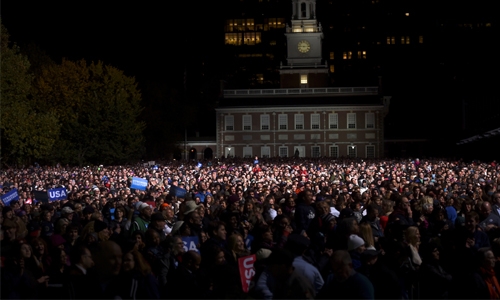 The European Parliament elections this May “promise to be the most calamitous that we have known,” a group of 30 leading intellectuals and Nobel laureates predicted in a pro-European manifesto published last week. The contributors warn that Europe is “coming apart before our eyes” as a result of “the populist forces washing over the continent.” Given the habitually low levels of participation in European elections, right-wingers hope to mobilise their supporters and storm the corridors of power — despite their innate hatred of the EU’s democratic institutions and human rights norms.

Unlike euroskeptics in the UK, the goal of mainland European right-wing populists isn’t to quit the EU, but to subvert it and take it over. A couple of weeks ago, Italy’s hard-line Interior Minister Matteo Salvini met leading Polish politician Jaroslaw Kaczynski, after which they announced an “Italo-Polish axis” to bring about a “new European spring” in May’s elections. Hungary’s Prime Minister Viktor Orban hailed this initiative and urged “anti-migration politicians” to hijack European institutions. “The Warsaw-Rome axis is one of the most wonderful developments of the year so far,” Orban declared, commenting that the elections were a chance to bid farewell “to liberal democracy.”

Austria’s far-right Interior Minister Herbert Kickl last week signalled his readiness to upturn the European Convention on Human Rights to impose harsher procedures for asylum seekers. “I believe in the principle that law should follow politics and not the other way round,” he ominously stated. This coincided with hundreds of demonstrators in Vienna marching in opposition to the far-right coalition, chanting: “Don’t let Nazis govern.”  Galvanised by the current US administration, many European states are today characterised by ascendant far-right populists, united by their hatred of the EU’s liberal blueprint. Erstwhile Donald Trump ally Steve Bannon has taken it upon himself to try and unite these various xenophobic European trends.

Vladimir Putin also plays a major role in nurturing these movements, while unleashing his online trolls to sabotage democratic processes.  When I speak to senior European security officials, they warn that far-right terrorism is a principal threat to European stability, with a rapid increase in attacks and activism since 2016. The UK police’s most senior counter-terrorism officer issued a public warning last week about the surge in far-right terrorism, with four potential attacks by such groups foiled over the past year. He expressed concern that extreme-right violence had apparently been bolstered by the tensions fuelled by Brexit. An explosive new survey highlighted that every single murder committed by extremists in the US during 2018 was attributed to the far right, representing a 35 per cent rise in American extremist violence from 2017.

Nearly three-quarters of extremist murders in America in the past decade are linked to right-wing domestic terrorism. The UK has experienced 12 far-right terrorist attacks since 2017, including the Finsbury Park Mosque attack, where a far-right terrorist drove a van into a crowd of worshippers. The slaughter of 11 worshippers at a Pittsburgh synagogue last year was the most visible manifestation of an increase in attacks against American and European Jews, with the UK logging an average 100 anti-Semitic incidents every month during 2018. “There has been a real and significant increase in far-right terrorist activity, particularly in the last two years,” one senior researcher commented.  The problem with these authoritarian far-right forces isn’t just that their racist ideologies are so detestable, but that they are aggressively seeking to subvert European institutions and deploy the democratic system against itself.

Once these elements capture power — at local and national levels — they shatter democratic institutions through a thousand different methods: Gerrymandering electoral processes, co-opting the judiciary and media, tearing up legislation, enriching themselves through corruption and Mafioso activities, purging opposition elements, and manipulating public opinion. Moderate British MPs opposed to a hard Brexit have been subjected to harassment and intimidation from nationalist protesters outside Parliament, fuelling a toxic climate very much at odds to what those of us living in the UK are accustomed to. In an indication of the mainstreaming of extreme-right ideology, a new study shows that more than 40 percent of European votes for the populist radical right come from women.

These groups have historically been dominated by men.  With Angela Merkel soon to stand down and Emmanuel Macron facing rebellion in France, right-wing regimes in Poland, Italy, Hungary and Austria hope to exploit the May elections to wrest the steering wheel of continental policy-making away from the French and Germans. If they succeed, Europe would shift from being a beacon of progressive liberalism to a hothouse for exporting populist authoritarianism around the world. If they get their way, autocrats like Rodrigo Duterte, Putin, Bashar Assad, Nicolas Maduro, Xi Jinping, Ali Khamenei and Recep Tayyip Erdogan will become the rule, not the exception. The implications are particularly glaring after the genocide of the Rohingya people and the mass internment of up to a million Uighur in China — with scarcely a glimmer of a response from the “civilised” world.

With the populist right poised to consolidate its continent-wide position, where is the centre ground’s vision for rejuvenating Europe’s liberal heritage, offering voters a positive and progressive vision to improve lives, rather than fostering hatred and divisions? Where is the moderate majority willing to speak up for liberal democracy and human rights? The European intellectuals in their manifesto warn that enlightened citizens must act now “or perish beneath the waves of populism.” With much of the citizenry across the West scarcely conscious of the existential threat that the far right poses, can the civilised world be mobilised in time to prevent an anti-democratic coup in the European elections and push back this global tide of xenophobia and hatred?