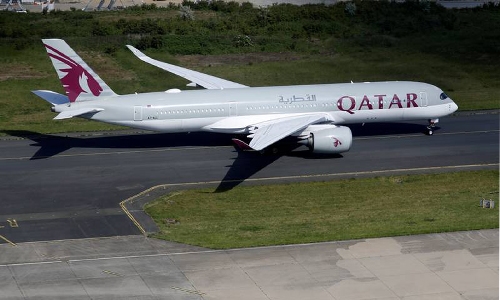 Qatar Airways reported its fourth consecutive annual loss as the group went through a "challenging year" amid the Covid-19 pandemic and incurred impairment charges related to grounded aircraft.

The state-owned airline group doubled its annual loss to 14 billion Qatari rials ($4.1bn) in the fiscal year ending March 31, compared to a loss of 7bn Qatari rials a year earlier, as the pandemic caused an "extensive" loss of passenger traffic and revenue, it said in a statement on Monday.

Overall group revenue declined 42.6 per cent year-on-year to 29bn Qatari rials as it carried fewer passengers. Qatar Airways booked a one-time impairment charge of 8.4bn Qatari rials related to the grounding of the airline's 10 Airbus A380 and 16 A330 fleet, it said.

The carrier also received a capital injection of 11bn Qatari rials from its shareholder, the government of Qatar, to "support the business’s continuity", it said.

"Our organisation did not receive any subsidies in the form of salary support or grants."

Qatar Airways carried 5.8 million passengers during the fiscal year, down 82 per cent from 32.4 million a year ago, it said. Passenger revenue declined 78 per cent year-on-year to 7.97bn Qatari rials from 37bn Qatari rials.

The airline’s workforce reduced to 36,707 employees, down from 50,110 people a year earlier, with its staff taking a temporary 15 per cent salary reduction, it said.

The airline currently flies to more than 140 destinations, from a low of 33 cities during the Covid-19 pandemic, it said.

It launched nine new destinations including Abidjan in Cote d’Ivoire, Abuja in Nigeria, Accra in Ghana, Brisbane in Australia, Harare in Zimbabwe, Luanda in Angola, Lusaka in Zambia as well as US flights to San Francisco and Seattle.

Its air cargo business recorded a 4.6 per cent rise in freight tonnes handled over the previous fiscal year, with 2,727,986 tonnes handled in 2020/21. As a result, air cargo revenues more than doubled.

Export of Bahrain local products up 76%