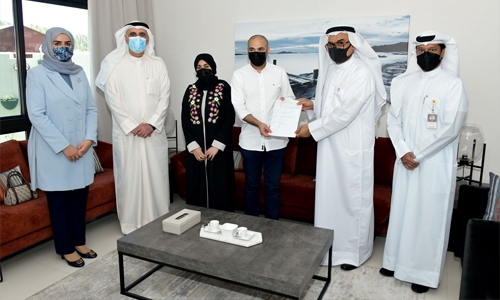 Al Baraka Islamic Bank announced the handover of the first villa in the “Danat Al Baraka” project in Jannusan. The handover follows the Bank’s announcement of exclusive financing offers under the Mazaya programme in cooperation with the Eskan Bank and the Ministry of Housing.

Commenting, Fatema AlAlawi, the Head of Retail Banking at Al Baraka Islamic Bank, said: “We are thrilled beyond words to be able to fulfil our part in meeting the residential needs of citizens and contributing to the development process, through the launch of holistic housing solutions that aims to raise the standards of living.”

The Danat Al Baraka project includes 211 modern villas with four different contemporary designs - each having two floors with four rooms, a spacious hall, a kitchen and an annexe for a domestic worker, and a garage consisting of two parking spaces. The project is on a land of 73,514 square meters in Janusan.

It is considered the fifth in a series of Danat projects, which includes: Danat Al Madina, Danat Al Riffa, Danat Al Seef and Danat Al Lawzi.