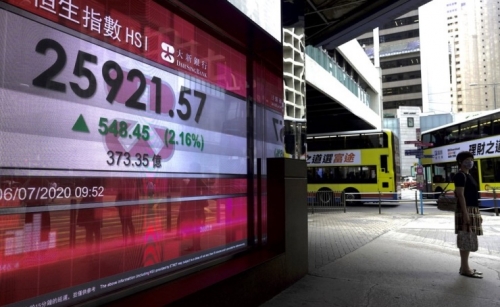 Asian stock markets rose Monday as investors looked ahead for data they hope will support optimism about a global economic recovery.

Benchmarks in Shanghai, Tokyo, Hong Kong and Australia all advanced.

“The battle between the Covid-19 drag and improving economic conditions continues,” said Jingyi Pan of IG in a report.

This week, investors are looking ahead to interest rate decisions in Australia and Malaysia. The Reserve Bank of Australia is expected to keep its benchmark rate at a record low of 0.25% while forecasters expect another cut from Bank Negara Malaysia.

Markets also are watching an election in Singapore and possible unrest in Hong Kong over a security law.

Share prices have risen as some countries ease anti-virus measures and reopened businesses, but forecasters warn the surge might be too early to be sustained by uncertain economic conditions.

Whether the rally can be sustained “is hugely dependent on how markets react if improving data stabilizes or goes into reverse,” said Stephen Innes of AxiCorp in a report.

That is despite a surge in new cases in the populous U.S. states of Florida, Texas and California. That has prompted some governors to halt reopening of businesses or to order others to re-close.