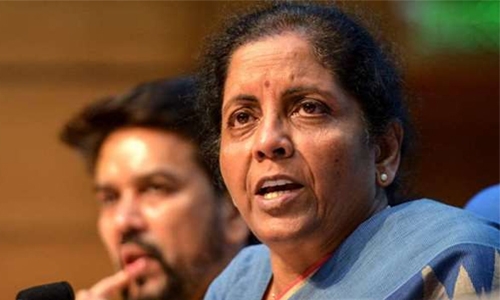 India said yesterday it would pump in nearly 10 billion dollars into government banks to ease liquidity crunch in Asia’s third-largest economy. “We are releasing 70,000 crore ($9.7 billion) upfront into public sector banks.... This will benefit all corporate and retail borrowers,” Finance Minister Nirmala Sitharaman said at a news conference in New Delhi.

She also said she would roll back an extra fee that had been introduced in the July budget on profits from equity sales. Sitharaman announced a slew of other steps, including an agreement by lenders to pass onto borrowers interest rate cuts by the central bank. “People were saying that the benefit of rate reductions don’t reach them at all, or reaches in trickle. There was an across the board grievance,” Sitharaman said.

“This will result in reduced EMI (equated monthly installments) for housing, vehicle, retail and other loans.” Earlier this month, India’s central bank cut interest rates for the fourth time this year to a nine-year low in an attempt to boost growth, but credit has remained tight for firms and consumers.

In an effort to boost car sales Sitharaman said the ban on purchasing new vehicles by government departments would be lifted. Gross domestic product (GDP) for the world’s sixth-biggest economy grew 5.8 per cent in the final quarter of 2018, down from 6.6pc in the previous quarter.

Fed will act ‘as appropriate’ to sustain US expansion: Powell