Jadeja leads India to 297 | THE DAILY TRIBUNE | KINGDOM OF BAHRAIN 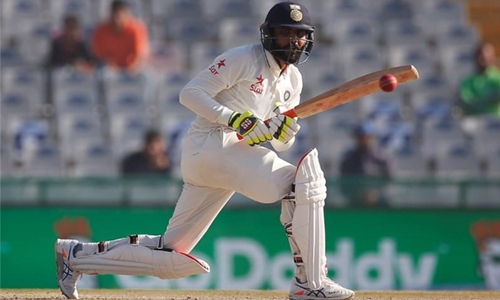 Ravindra Jadeja played a key role in extending India’s first innings as they were eventually dismissed for 297 on the stroke of lunch on the second day of the first Test against the West Indies at the Sir Vivian Richards Stadium in Antigua. Jadeja was last out for 58, top-edging an attempted pull off home captain Jason Holder to give wicketkeeper Shai Hope his fifth catch of the innings.

Kemar Roach finished the innings as the best of the West Indies bowlers with figures of four for 66 while fellow fast bowler Shannon Gabriel claimed three for 71. It was Roach who gave the West Indies an ideal start to the day when he removed Rishabh Pant for 24, the attacking wicketkeeper-batsman offering a straightforward catch to Holder at second slip as India slipped from the overnight position of 203 for six to 207 for seven.

However, any hopes the hosts entertained of quickly polishing off the tourists’ innings were frustrated by Ishant Sharma, who defied the West Indies for over an hour in contributing 19 to a 60-run eighth-wicket partnership with Jadeja. Sharma’s admirable defiance was eventually ended though by a slower delivery from Gabriel and Mohammed Shami lasted just one delivery, being caught and bowled by off-spinner Roston Chase.

However. Jadeja was still able to get to the half-century mark, his 11th in Test cricket, before one attacking shot too many with last man Jasprit Bumrah at the other end ended his contribution and the team’s innings. His three-hour innings spanned 112 deliveries and was highlighted by six fours and one six.