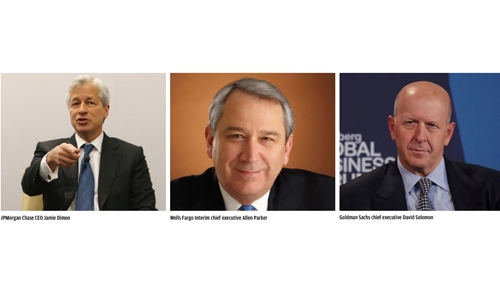 Mixed earnings at large US banks

The trio of results moved markets into the heart of second-quarter earnings season, which comes against a backdrop of uncertainty over international trade and an anticipated loosening of monetary policy, with the Fed expected to cut interest rates later this month. Bank profits have been boosted the last few years from a series of interest rate hikes. But the Fed has pivoted away from that stance and is now expected to cut interest rates as soon as this month.

Lower interest rates are generally viewed as a drag for large banks because it reduces the net interest income of financial companies -- the difference between the interest rates it charges consumers for loans and the interest it must pay for deposits. At JPMorgan, key areas of strength included consumer banking, where it scored from higher net interest income. JPMorgan also generated increased revenues connected to the credit card business and higher auto loans and lease originations. Net profit came in at $9.7 billion, up 16.1 per cent and a company record.

Revenues were up 4.1pc to $29.6 billion. Chief executive Jamie Dimon said uncertainty about issues such as trade and monetary policy is “a constant” while geopolitical tension s “may be a little bit higher now than normal,” but added that “the consumer in the United States is doing fine” and that economic conditions are solid in other key markets. “So I wouldn’t get too pessimistic yet,” Dimon said. But shares were choppy after the report, with analysts pointing to the bank’s forecast for $57.5 billion in 2019 net interest income, down from the prior $58 billion forecast.   Bank executives said they anticipate up to three interest rate cuts this year.

At Wells Fargo, net income rose 19.7pc to $6.2 billion, while revenues were essentially flat at $21.6 billion. Wells Fargo experienced a dip in net interest income due to a significant jump in interest payments for deposits. But that increase was largely offset by other gains, such as higher service charges on deposit accounts and lower non-interest expenses.  Results in the year-ago period were hit by a large one-time tax expense.

Executives were peppered with questions about the expected hit from Fed actions, as well as additional costs for auditing, risk management and other governance initiatives following a fake accounts scandal that roiled the bank a couple of years ago.  Lingering skepticism of the bank prompted the resignation in March of chief executive Tim Sloan. Interim chief executive Allen Parker said he had no information about the selection of a new CEO and that the board was overseeing the process.

Asked if he was under contention, Parker said he had no reason to think the board had shifted from its stated aim to pick an outsider to lead the bank. At Goldman Sachs, net income was $2.2 billion, down 6.4pc from the year-ago period.  Revenues dropped 1.8pc to $9.5 billion.

Goldman suffered from a decline in fixed income, currency and commodity trading, a weakness at other large banks. Financial advisory revenues also fell due to lower merger and acquisition activity compared with the year-ago period. Debt underwriting revenue also fell. “We’re encouraged by the results for the first half of the year as we continue to invest in new businesses and growth to serve a broader array of clients,” chief executive David Solomon said in a statement.