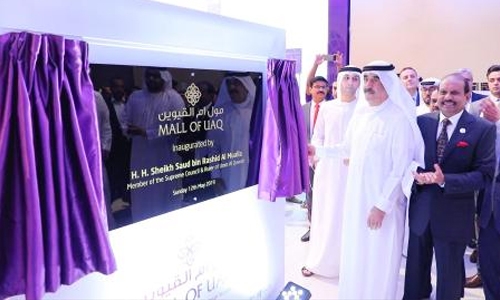 Abu Dhabi based retailer LuLu opened its latest shopping destination - Mall of UAQ in the emirate of Umm Al Qaiwain along with its LuLu Hypermarket. The new shopping mall and the hypermarket was inaugurated by Sheikh Saud bin Rashid Al Mualla, Member of UAE Supreme Council and Ruler of Umm Al Qaiwain in the presence of Sheikh Rashid bin Saud Al Mualla, Crown Prince of Umm Al Quwain and other royal family members. Upon arrival, the Ruler of UAQ and the Crown Prince was received by Yusuff Ali MA, Chairman & Managing Director of LuLu Group along with Saifee Rupawala, CEO, Ashraf Ali MA, Executive Director, Salim MA, Director & other senior officials.

Also, present on the occasion were several other high-ranking government and police officers, representatives from the local business community and a large number of citizens and residents. The ruler of UAQ unveiled a plaque to commemorate the opening of Mall of UAQ and also digitally to mark the grand opening of the latest shopping centre in the emirate. After the inauguration, Sheikh Saud Al Mualla, Sheikh Rashid Al Mualla and other dignitaries toured various sections of the newly built mall and LuLu hypermarket and congratulated the Group Chairman, Yusuff Ali MA on the successful completion of the mall.

“I want to express my sincere gratitude to the His Highness Sheikh Saud bin Rashid Al Mualla, Member of UAE Supreme Council and Ruler of Umm Al Qaiwain, His Highness Sheikh Rashid bin Saud Al Mualla, Crown Prince of Umm Al Quwain for personally coming and inaugurating the Mall of UAQ, the largest in the emirate of UAQ, which will bring worldclass shopping closer to citizens and residents,” said Yusuff Ali MA, Chairman of LuLu Group. “This is a very important project for us in the emirate of UAQ as we expand our presence across the different parts of the UAE.

It has been our policy to reach nearer to the people rather than driving a long distance to reach us,” he said. Strategically located on King Faisal Street, the Mall of UAQ is spread in a single level. The mall is complete with a full line of amenities and facilities which include the best brands of luxury and lifestyle, a well-appointed food court that serves international cuisines, coffee shops, money exchange, bank, dinein outlets, 5 screen multiplex, an entertainment zone, prayer halls, among other facilities and will serve the residents of UAQ and its nearby areas. The 100,000 sq. feet LuLu hypermarket will be the anchor tenant of the mall and it has been designed using the latest retail space concepts and most modern technology for ease of shopping and greater convenience.