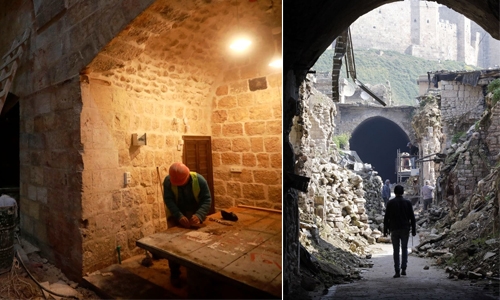 In the middle of Aleppo, at the top of a tall hill, the ancient Citadel looms over half-destroyed buildings along narrow cobblestone roads. People bustle around the castle’s majestic entrance and fill reopened cafes, but most of the centuries-old neighbourhood, which is roughly the size of Central Park, remains a ghost town. The Old City of Aleppo, a UNESCO World Heritage Site, was for several years the front line in a battle for control of the city between Syrian government forces in the west and rebel forces in the east.

After the fighting there ended in December 2016, UNESCO estimated that 60 percent of the neighbourhood was severely damaged and 30 percent of it was entirely destroyed. Now, reconstruction has begun. But sanctions are strangling the publicly funded effort, and private owners have an incentive to hastily rebuild without keeping the historic nature of the area. I’ve visited my hometown several times since the battle ended. Last month, I drove past lines of cars snaking for several blocks near gas stations.

Motorists were sleeping inside them, waiting for their turn to get their newly reduced weekly ration of fuel, which amounts to a gallon a day, from stations that ran dry shortly after opening. US sanctions against Iran, Syria’s principal supplier, have resulted in a countrywide fuel shortage since October 2018. Sanctions on Syria, however, cover more than just fuel; the US Treasury Department’s Office of Foreign Assets Control (OFAC) targets transactions with any instrument of the government of Syria, “including the Central Bank of Syria,” making financial transfers in or out of the country close to impossible. Sanctions also delay imports of vital goods like medicine and suffocate the potential for private business in the country.

The sanctions are explicitly intended to “disrupt support for the Assad regime by preventing the normalization of economic and diplomatic relations and the provision of reconstruction funding,” which means that an attempt to rebuild what the eight-year-long war in Syria has destroyed could meet with potential restrictions. This is personal for me: I grew up watching my father (an architect) dedicate his life to preserving the Old City. And then I watched from afar as the war tore it apart. On this cold April afternoon, I made my way to the hollowed-out buildings outside the Great Mosque of Aleppo to meet with Thierry Grandin, my father’s friend of almost 40 years and an architect and conservationist who has worked on the Old City since the 1980s.

Thierry is managing many of the Aga Khan Trust for Culture’s reconstruction and conservation projects in the Old City, including the rebuilding of the Ayyubid Palace inside the Citadel after its destruction by a mortar shell. The AKTC, a nondenominational philanthropy created by the leader of the Nizari Ismaili Shiites, is one of the few international organizations able to carry out projects with the Syrian government’s approval while — so far — avoiding restrictions set by international sanctions. In my previous visits, I would walk through the rubble in the Old City, marvel at the magnitude of the destruction and wonder if anything would ever be restored.

The Al-Madina Souq of Aleppo, once the largest covered bazaar in the world, was heavily damaged during the war, with large parts of it destroyed by fire. This time, Thierry led me to a bright, reconstructed section of the souq, bustling with workers paving new cobblestone roads as others discussed the feasibility of solar panels for lighting. This section had been selected by the government as the pilot for reconstruction funded by the AKTC, possibly because it was not as extensively damaged as other parts of the souq. It was once the Souq el Saqatieh, where shoppers bought meat and nuts.

The AKTC is restoring the entryways of each stall along the 110-yard stretch covered by this roughly $450,000 project, leaving only minimal interior restorations for shopkeepers to handle. Although this will help a handful of businesses, the entire souq is more than seven miles long, with heavier damage in some parts, and Thierry estimates it would cost $90 million to entirely rebuild. As we walked through the souq, people approached Thierry to shake his hand with warmth and gratitude, and to ask if the AKTC was going to work on their area next.

But on top of existing OFAC sanctions, the US House recently passed the Caesar Syria Civilian Protection Act, which the White House supports, and which would further tighten restrictions on Syria’s financial institutions. Thierry worries that this would jeopardize funding for future projects by entities such as the AKTC. “I don’t want to promise him anything I can’t deliver,” he told me after yet another hopeful shopkeeper asked him about the pace of reconstruction. Meanwhile, alongside the careful restorative work of the AKTC, private owners and leaseholders are rebuilding with more haste and less concern for historical accuracy.

“Many shopkeepers who lost the papers proving they own a property or hold a lease are renovating as an informal way of proving their ownership,” Thierry said, alluding to a postwar Syrian law that gives owners one year to claim property or lose it. “A lot of the reconstruction is well done,” Thierry explained, “others not so much.” He keeps a close eye on private projects across the Old City, encouraging the property owners and the Directorate-General for Antiquities and Museums to preserve some semblance of the neighbourhood’s historic fabric.

“You can tell that these two rebuilt archways don’t have the same shape as the intact one next to them,” Thierry said as he pointed out a partially destroyed storefront with a renovated facade. “It’s not difficult to keep the original dimensions. Owners just need guidance.”