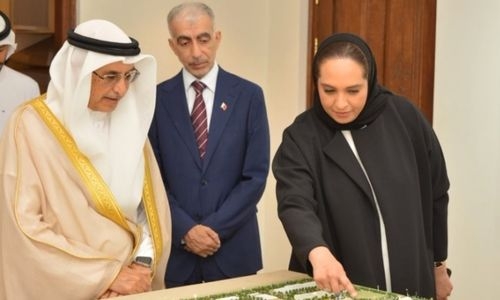 It’s all systems go for the construction of 372 new housing units for citizens in Khalifa Town. Deputy Prime Minister and Infrastructure Minister Shaikh Khalid bin Abdulla Al Khalifa said the Ministry of Housing and Urban Planning’s preparations are underway for the start of this BD17 million-worth major housing project. He made the statements while paying a field visit to “Khalifa Town”, along with several ministers and officials.

Shaikh Khalid bin Abdulla directed the relevant ministries and government service departments to start preparing the necessary infrastructure works to implement this project according to a specific timetable, as well as to provide the required cash flows.

The project, which is part of the housing commitments contained in the current Government Action Plan (2019-2022), is expected to be completed in two years. The Deputy Prime Minister commended the directives of His Majesty King Hamad bin Isa Al Khalifa, and the policies adopted by the government, led by His Royal Highness Prince Salman bin Hamad Al Khalifa, the Crown Prince and Prime Minister, to launch new programmes for the citizens.

Shaikh Khalid bin Abdulla stressed that the new housing financing schemes and the Government Lands’ Development Programme reflect the success of the government’s initiatives aimed at enhancing the partnership with the private sector.

He noted that the latter is an essential partner to the government in facilitating the citizens’ access to adequate affordable social housing. Shaikh Khalid bin Abdulla inspected the land lots allocated in Khalifa Town for the implementation of the government-owned lands development rights programme (Government Lands’ Development Programme), which will provide more than 3,300 housing units that will be offered at reasonable prices for the beneficiaries of the newly announced housing financing schemes.